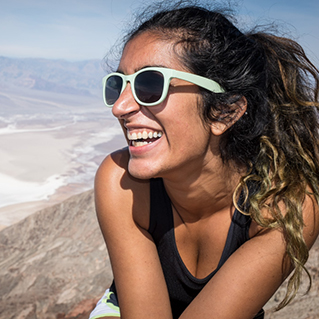 Spending his time off from grade school at the library reading up on planets and rockets, Eric Ianson fell in love with space. After a stint as a civilian working on missiles and combat systems for the Navy, he fulfilled his lifelong dream to join NASA. He tells us about his current job as deputy director of NASA’s Planetary Science Division, and some of his favorite NASA missions.

It started when I was a kid. I would spend Saturdays – or weekdays during the summer – going to the library, and reading up on space and missile systems. I remember doing a lot of photocopying back then to copy pictures out of books and magazines. I would bring those home with me, and I would draw lots of pictures about space. I loved learning about space and technology.

I joined NASA in 2004. I had a bit of a circuitous route to get to here. I worked for the Navy as a civilian for many years. I did engineering work on missiles and combat systems. Eventually, I decided to apply for a program executive position at NASA, and that brought me here.

It was a lifelong dream to work for NASA. One of my science projects in middle school was on the solar system. I did the project on the Voyager missions, and I built the model of the solar system and showed the track of both spacecraft. I had a train track that would follow the path that Voyager 1 and Voyager 2 took. I always think back to that as maybe the birthplace of my time at NASA. Then I came to NASA, and it's just been an exciting adventure working on different projects.

"It’s important to do the best that you can in whatever field you go into and be passionate about it."

In addition to my overarching duty as the deputy, I have two specific assignments. I'm the program director for NASA’s Mars Exploration Program, and for the Radioisotope Power Systems program (RPS).

The Mars Exploration Program is responsible for everything related to the robotic exploration of Mars except the Mars Sample Return Mission (although we coordinate closely with that program as well).

The Radioisotope Power Systems program develops the power systems for our two most recent rovers, Curiosity and Perseverance, as well as many of the outer solar system missions. [The outer planets are gas giants Jupiter and Saturn and ice giants Uranus and Neptune. Beyond Neptune are dwarf planets, including Pluto.]

If we're looking to go far beyond Earth into the outer solar system, we need to use nuclear power as opposed to solar arrays. The RPS program allows us to do that.

What one piece of advice would you give others who are interested in a similar career?

I think the main thing is to work hard and follow your dreams. While certainly, NASA hires many scientists and engineers, it's not exclusive to that. We hire people from many different backgrounds. We have English majors, artists, political science majors, and lawyers. It takes a diverse community to successfully implement all of our missions.

There's no magical route to follow to become an employee at NASA. Everyone I know has followed a different path. Everyone should just follow the path that works best for them, but always continue to try and work to get opportunities for yourself, such as internships. Certainly do networking to get better connected, and positioned for when an opportunity may present itself.

The biggest challenge that I faced was that the first mission that I was involved in for a launch at NASA – the Orbiting Carbon Observatory – didn't reach orbit. There was a failure on the launch vehicle that prevented it from reaching orbit. I was sitting in the mission control center, and it was both the greatest day of my career and the worst day of my career. Watching the launch was super exciting, and everything seemed to be going well. Then there was an anomaly, and we realized that the mission was lost.

The biggest mentor in my career was Michael Freilich, who was the director of NASA’s Earth Science Division for about 13 years. He passed away after a battle with pancreatic cancer in 2020, and it was incredibly tragic. He was still a vital man. He was an incredible person to work for. He was brilliant; he might be the smartest person I've ever met. Every time you went into his office, you left smarter. On top of all that, he was funny, extraordinarily kind, and generous. He really helped guide my career throughout my time at NASA.

When you work at NASA, you can find inspiration almost everywhere you go. There are people throughout the agency who are fantastic. They come from all different backgrounds and they bring incredible things to the table. My current boss, Dr. Lori Glaze, is amazing. I get a charge out of the way we collaborate on things.

When you're working at NASA, you're working among the smartest people in the world. It's somewhat like professional sports. Everyone who plays professional sports was the best in their high school. Most of them were at the top of their college teams. Then when they joined the NFL or the NBA, they were the best of the best. That's true at NASA, as well. We have the best of the best, and it's gratifying to work with so many incredible people.

I feel I can learn something from everyone I work with, regardless of their position.

I certainly have a warm place in my heart for the Orbiting Carbon Observatory and the follow-on mission, just for everything that happened with that. There have been a lot of other cool missions that I've worked on. In Earth science, there’s the Cyclone Global Navigation Satellite System (CYGNSS), a constellation of eight micro-satellites that gather data about wind speeds over Earth's oceans to improve our understanding of hurricanes. It was also fun to work on the Aquarius mission, in collaboration with the Argentina space agency.

With planetary missions, there's no shortage of amazing missions. Certainly, the Mars rovers are incredible. Perseverance is collecting samples right now on Mars to bring to Earth. We have the Mars helicopter, Ingenuity, which has been fun to work with. Two other missions were recently launched. One is Lucy, a mission to the Trojan asteroids, which have never been explored before. Then the DART mission was launched in November of 2021. It’s NASA’s first planetary defense mission to attempt to deflect an asteroid. We have Europa Clipper coming up, which I'm excited about because it will explore Jupiter’s icy moon, which may have conditions suitable for life in its subsurface ocean. Dragonfly is another exciting mission, in which we're going to fly a rotorcraft on Saturn's moon Titan. There are just so many fun projects. It's hard to choose favorites among them.

What are some fun facts about you?

My current hobby is photography. I love to do travel, landscape, and architecture photography.

I'm also a big consumer of pop culture. I'm a huge movie fan. Also, I've been to around 300 rock concerts. One time, I wrote a weekly blog theorizing about the characters and mysteries on the TV show “LOST.”

I have two children and a fantastic wife who accompanies me on all of my adventures. We love to travel all around the U.S. and the world.

I attended the launch of the ECOsystem Spaceborne Thermal Radiometer Experiment on Space Station, or ECOSTRESS, on June 29, 2018, at Cape Canaveral, Florida. ECOSTRESS is an Earth science instrument built by NASA’s Jet Propulsion Laboratory (JPL). It launched in a SpaceX Dragon cargo spacecraft aboard a Falcon 9 rocket to the International Space Station. Liftoff was just before dawn, and the twilight effect, or phenomena, created this incredible halo around the rocket exhaust. It was unlike anything I had ever seen.