Both Arrokoth (visited by NASA's New Horizons mission) and Pluto are in the Kuiper Belt – a donut-shaped region of icy bodies beyond the orbit of Neptune. There may be millions of these icy objects, collectively referred to as Kuiper Belt objects (KBOs) or trans-Neptunian objects (TNOs), in this distant region of our solar system.

Similar to the asteroid belt, the Kuiper Belt is a region of leftovers from the solar system's early history. Like the asteroid belt, it has also been shaped by a giant planet, although it's more of a thick disk (like a donut) than a thin belt.

The Kuiper Belt is truly a frontier in space – it's a place we're still just beginning to explore and our understanding is still evolving.

10 Things to Know About the Kuiper Belt
1

The Kuiper Belt is a region of space. The known icy worlds and comets in both regions are much smaller than Earth's Moon.

The Kuiper Belt is a doughnut-shaped ring of icy objects around the Sun, extending just beyond the orbit of Neptune from about 30 to 55 AU.

Short-period comets (which take less than 200 years to orbit the Sun) originate in the Kuiper Belt.

There may be hundreds of thousands of icy bodies larger than 100 km (62 miles) and an estimated trillion or more comets within the Kuiper Belt.

Some dwarf planets within the Kuiper Belt have thin atmospheres that collapse when their orbit carries them farthest from the Sun.

Several dwarf planets within the Kuiper Belt have moons.

Egg-shaped Haumea has a ring around it.

It is not clear if worlds in this distant, cold region are capable of supporting life as we know it.

Astronomers are searching for a possible planet that might explain the strange orbits of several Kuiper Belt Objects. The nickname: Planet 9.

Where is the Kuiper Belt?

The inner edge of the Kuiper Belt begins at the orbit of Neptune, at about 30 AU from the Sun. (1 AU, or astronomical unit, is the distance from Earth to the Sun.)

The inner, main region of the Kuiper Belt ends around 50 AU from the Sun. Overlapping the outer edge of the main part of the Kuiper Belt is a second region called the scattered disk, which continues outward to nearly 1,000 AU, with some bodies on orbits that go even farther beyond.

How was the Kuiper Belt created?

Astronomers think the icy objects of the Kuiper Belt are remnants left over from the formation of the solar system. Similar to the relationship between the main asteroid belt and Jupiter, it's a region of objects that might have come together to form a planet had Neptune not been there. Instead, Neptune's gravity stirred up this region of space so much that the small, icy objects there weren't able to coalesce into a large planet. 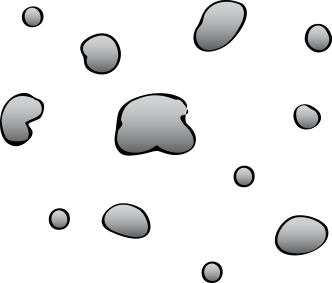 Just outside of Neptune’s orbit is a ring of icy bodies. We call it the Kuiper Belt.

This is where you’ll find dwarf planet Pluto. It’s the most famous of the objects floating in the Kuiper Belt, which are also called Kuiper Belt Objects, or KBOs.

There are bits of rock and ice, comets and dwarf planets in the Kuiper Belt. Besides Pluto and a bunch of comets, other interesting Kuiper Belt Objects are Eris, Makemake and Haumea. They are dwarf planets like Pluto.

NASA Space Place: All About the Kuiper Belt ›
Resources

NASA has extended the planetary science missions of eight of its spacecraft due to their scientific productivity and potential to deepen our knowledge.

What Are JPL's Lucky Peanuts?
A spacecraft has sent back pictures of the sky from so far away that some stars appear to be in different positions than we'd see from Earth.

Hubble to Conduct Largest-Ever Survey of Kuiper Belt
The farthest object ever explored is slowly revealing its secrets, as scientists piece together the puzzles of the Kuiper Belt object NASA's New Horizons spacecraft flew past on New Year's Day, four billion miles from Earth.

A Prehistoric Puzzle in the Kuiper Belt
Meet the women leading two of humankind's two most distant space missions.

Women at the Helm
The highest resolution images offer about 110 feet (33 meters) per pixel.

New Horizons Spacecraft Homing in on Kuiper Belt Target
Without Hubble's intriguing early images, there might have never been a mission to explore Pluto and the Kuiper Belt.

Hubble Paved the Way for the New Horizons Mission to Pluto and Ultima Thule
From its brightness and size, New Horizons team members have calculated Ultima's reflectivity, which is only about 10 percent, or about as dark as garden dirt. Beyond that, nothing else is known about it.

All About Ultima: New Horizons Flyby Target is Unlike Anything Explored in Space
With no apparent hazards in its way, NASA's New Horizons spacecraft has been given a "go" to stay on its optimal path as it speeds closer to a Jan. 1 flyby of a Kuiper Belt object a billion miles beyond Pluto.

NASA's New Horizons Spacecraft Takes the Inside Course to Ultima Thule
It's vast and mysterious, cold and dark. It's a place we've only just begun to explore. Here are 10 things to know about the Kuiper Belt.

10 Things to Know About the Kuiper Belt
On New Year's Day 2019, NASA's New Horizons will fly by a distant Kuiper Belt Object—and open a new chapter in how we define our place in the cosmos.

To Ultima and Beyond: Our Solar System's Small Worlds
Here’s a lineup of the various kinds of small bodies that orbit the Sun and sometimes impact planets and each other.

The Usual Suspects: a Rogues Gallery of Asteroids, Comets and Other Witnesses to History
NASA will host a live Science Chat at 2 p.m. EST Wednesday, Nov. 7, to discuss upcoming encounters of two of the agency’s planetary missions, New Horizons and OSIRIS-REx.

Cosmic Detective Work: Why We Care About Space Rocks
The path through the solar system is a rocky road. Asteroids, comets, Kuiper Belt Objects—all kinds of small bodies of rock, metal and ice are in constant motion as they orbit the Sun. But what’s the difference between them? Why do these miniature worlds fascinate space explorers so much?

10 Things: What's That Space Rock?
A team of researchers have found a distant Kuiper Belt Object with an orbit that supports the theory of a distant, undiscovered large planet on the far edge of our solar system.