Beyond Our Solar System

IntroductionScientists use powerful telescopes—on Earth and in space—to study distant stars and galaxies. The famous Hubble Space Telescope, which revealed the cosmos in great detail for the first time, will soon be replaced by the even more powerful James Webb Space Telescope. Meanwhile, the Kepler mission has scoured a section of our galaxy in search of other planets.

NASA’s New Horizons, which flew past Pluto in 2015 and is currently exploring the Kuiper Belt beyond Neptune, will eventually leave our solar system. As will the now inactive Pioneer 10 and 11 spacecraft.

Before 1983, the only confirmed planets were those in our own solar system, though scientists believed many planets were in orbit around distant stars. Then a team in 1983 spotted a disc around Beta Pictoris believed to be made up of the raw materials of planet formation—the first evidence of an exoplanet. The first exoplanet was discovered nine years later in 1992 and the numbers of known planets beyond our solar system have been growing rapidly ever since.

For more discoveries and stories of exploration, visit the Exoplanets Exploration Timeline.

"Don't do it unless you are willing to put in an enormous amount of time and effort."

"Just because your story is different from other people doesn’t mean that you don’t deserve happiness."
More about Veronica Allen

"Math is going to be the basis for all the science and engineering that you will have to do in the future."
More about Suzanne "Suzy" Dodd

"See the beauty of the world with your own eyes and learn to see the corresponding beauty that mathematical calculations tell you is present."
More about Stephen Edberg

"I realized I could direct all of these energies and passions into hard problems that really matter and really excite me."

"A science or math degree can be useful for so many exciting careers."

"It's OK if I don't know everything."
More about Roland Vanderspek

Continue to work hard and don't give up.
More about Rob Zellem

The happiest people I know are ones who think of their field as both a hobby and a job.
More about Neil Gehrels (1952-2017)

f you enjoy puzzles, science or engineering may be the field for you. Scientific research and engineering is a continuous series of solving puzzles.
More about Nancy Roman (1925-2018)

You push until you get to that steady level of challenging and then you just keep going.
More about Mike Brown

"Being an astronomer is very much about being comfortable with thinking on your feet and coming up with compelling arguments on the fly."

Do what you love, and love what you do. It takes hard work; don't fool yourself into thinking that you can be really good at something witho

"You have to find what you're good at and what you really enjoy doing."

Be bold. Search out people who work in your area of interest.
More about Lynnae Quick

Science is not something that you just do by yourself in a room because you’re trying to solve something for a higher cause. It has to be fun.
More about Konstantin Batygin

If you have a passion for anything, whether it's astronomy or some other subject, never give up that passion.
More about Knicole Colon

No human had ever seen this landscape before. And for a period of maybe 20 minutes, half hour, we were the only ones to see this alien world.
More about Jonathan Lunine

John is veteran of five space shuttle flights, and visited Hubble three times during these missions.

I use art and design as a way to help scientists and engineers communicate.
More about Joby Harris

James Frederick “Jim” Bridenstine was sworn in as NASA’s 13th administrator on April 23, 2018.

"Work hard as an undergraduate, but don't restrict yourself to getting just a technical background."

"My job is to be the top advocate for planetary science in the federal government."

"Be a positive, solution provider and you will go far in any type of career!"
More about Heather Doyle

"By the time I got to college, at some point I was like, 'This is cool, maybe I could do this for my job.' A lot of my friends were bouncing around between different majors but I knew I wanted to do astronomy."

"I’ve always been very determined to have a career that I believed in, that would allow me to learn something new every day. I want to be constantly learning and I feel really lucky to always been able to have jobs like that, where every day I am exposed to something new -- people, ideas, or ways of doing things."

"I think it’s important for people to know that there isn’t just one path."
More about Elisa Quintana

Who inspires you? "My students."
More about David Latham

"Believe in yourself and don't be discouraged."
More about Courtney Dressing

Imagination will often carry us to worlds that never were. But without it we go nowhere.
More about Carl Sagan (1934-1996)

"Don't do it unless you are willing to put in an enormous amount of time and effort."

Astronauts pave the way for human exploration beyond our Earth. They are pilots, scientists, engineers, teachers, and more.

Project managers guide missions from concept to completion, working closely with team members to accomplish what they set out to do.

A camera payload uplink lead writes software commands that tell a rover what pictures to take.

The first thing that fired my imagination for planetary science was when the NASA Voyager spacecraft discovered active volcanoes on Jupiter's moon Io.

Melding science with design, artists create everything from large-scale installations to the NASA posters hanging in your bedroom.

Media specialists tells stories across social media and help feature missions and people on TV and in films, books, magazines, and news sites.

Writers/producers capture the incredible stories of NASA's missions and people and share them with the world.

Administrators and directors work out of NASA headquarters, prioritizing science questions and seeking to expand the frontiers of discovery.

Whether it's introducing kids to space or teaching physics to PhD candidates, educators help share their knowledge with the public.

Engineers design and build all types of machines, from what a spacecraft looks like to the software that directs where a rover goes each day.

From an astrophysicist to a volcanologist, scientists of all types pose questions and help find answers to the mysteries of our universe. 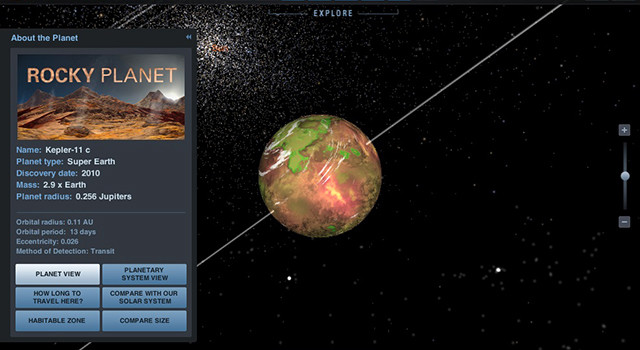 Explore in 3D—Eyes on Exoplanets

Get set for launch. “Eyes on Exoplanets” will fly you to any planet you wish—as long as it's far beyond our solar system. This fully rendered 3D universe is scientifically accurate, allowing you to zoom in for a close look at more than 1,000 exotic planets known to orbit distant stars.

With the click of a mouse, you can visit newly discovered gas giants, Earth-sized planets and “super Earths”—rocky like ours, but gargantuan. The program is updated daily with the latest finds from NASA's Kepler mission and from ground-based observatories around the world as they hunt for planets like our own.​

Eyes on Exoplanets
NASA is naming its next-generation space telescope currently under development, WFIRST, in honor of Nancy Grace Roman, who paved the way for space telescopes focused on the broader universe.

Telescope Named For ‘Mother of Hubble'
The space beyond Earth is so incredibly vast that units of measure which are convenient for us in our everyday lives can become GIGANTIC.

Cosmic Distances
Fun — and even educational — NASA activities to do at home.

10+ Things to Do with NASA at Home
The Voyager imaging team asked for the photo to show Earth’s vulnerability — to illustrate how small, fragile and irreplaceable it is on a cosmic scale.

10 Things You Might Not Know About Voyager's Famous 'Pale Blue Dot' Photo
Mission engineers confirmed at about 2:30 p.m. PST (5:30 p.m. EST) Thursday the spacecraft was placed in safe mode, ceasing all science operations.

Spitzer Space Telescope Ends Mission of Astronomical Discovery
Spitzer, designed to reveal the far, cold and dusty side of the universe, made discoveries its designers never even imagined, including a previously unseen ring of Saturn.

10 Things Spitzer Taught Us About Our Solar System
Engineers did not have exoplanet science in mind when they designed the Spitzer Space Telescope in the 1990s, but thanks solid engineering, Spitzer’s observational powers were used far beyond original expectations.

10 Things Spitzer Taught Us About Exoplanets
One of NASA's four Great Observatories, Spitzer launched on Aug. 25, 2003, and has studied the cosmos in infrared light. Its breathtaking images have revealed the beauty of the infrared universe.

NASA Says Goodbye to One of Agency's Great Observatories
An emerging idea, bolstered by three decades of science, is that there are "Goldilocks stars" — not too hot, not too cool, and above all, not too violent to host life-friendly planets.

Goldilocks Stars Are Best Places to Look for Life
This new visualization of a black hole illustrates how its gravity distorts our view, warping its surroundings as if seen in a carnival mirror.

NASA Visualization Shows a Black Hole's Warped World
Scientists are working with powerful space telescopes to track down specific types of black holes that may hold clues to the formation of the universe.

Black Hole Seeds Missing in Cosmic Garden
The discovery of a dizzying variety of planets and planetary systems is prompting a wholesale re-evaluation of what it takes for a planet to be habitable.

Oceans, Beaches, Cosmic Shorelines: Our Changing Views of Habitable Planets
After nearly 16 years of exploring the cosmos in infrared light, NASA's Spitzer Space Telescope will be switched off permanently on Jan. 30, 2020.

How NASA's Spitzer Has Stayed Alive for So Long
To hunt for exoplanets, the flowerlike shade would need to stay aligned with a space telescope over vast distances. Recent work demonstrates how that's possible.

Starshade Would Take Formation Flying to Extremes
In this large celestial mosaic taken by NASA's Spitzer Space Telescope, there's a lot to see, including multiple clusters of stars born from the same dense clumps of gas and dust.

10 Things Einstein Got Right
Our solar system is a stormy place. Join us on a tour of storms.

10+ Things: Tour of Storms Across the Solar System
Astronomers have crossed an important threshold in revealing a discrepancy between key techniques for measuring the universe's expansion rate. New theories may be needed to explain the forces that have shaped the cosmos.

Mystery of the Universe's Expansion Rate Widens With New Hubble Data
A black hole and its shadow have been captured in an image for the first time, a historic feat by an international network of radio telescopes.

New Spinoff Publication Highlights NASA Technology Everywhere
What looks like a red butterfly in space is in reality a nursery for hundreds of baby stars.

'Space Butterfly' Is Home to Hundreds of Baby Stars
Humanity’s great leap into interstellar space — the space between the stars — has begun. Here are 10 things we’ve learned about going interstellar.

10 Things: Going Interstellar
A team of astronomers from have identified the most promising targets for this search in the new “TESS Habitable Zone Star Catalog.”

The Hunt Is on for Closest Earth-like Planets
Just as dust gathers in corners and along bookshelves in our homes, dust piles up in space too. But when the dust settles in the solar system, it’s often in rings.

What Scientists Found After Sifting Through Dust in the Solar System
The Cigar Galaxy's wind is aligned along a magnetic field and blows huge amounts of material into space — the equivalent mass of 50 million to 60 million Suns.