Scientist for a Day

The essay contest meets various U.S. National Standards for English and Science set by the National Council of Teachers of English / International Reading Association, and the National Research Council.

It also addresses topics covered in Next Generation Science Standards, including:

Middle School - MS-ESS1 Earth’s Place in the Universe MS-ESS1-3. Analyze and interpret data to determine scale properties of objects in the solar system

High School - HS-ESS1 Earth’s Place in the Universe HS-ESS1-6. Apply scientific reasoning and evidence from ancient Earth materials, meteorites, and other planetary surfaces to construct an account of Earth’s formation and early history

By participating in the essay contest, students will:

The essays of winning students will be published on NASA's Solar System Exploration Website.

U.S. winning students and their classes will have the opportunity to participate in a teleconference or videoconference to ask questions of NASA scientists. (Other countries may offer different prizes to their winners, at the discretion of their country’s national contest coordinator.)

All participating students will receive a certificate of participation with the images of the three moons they studied. 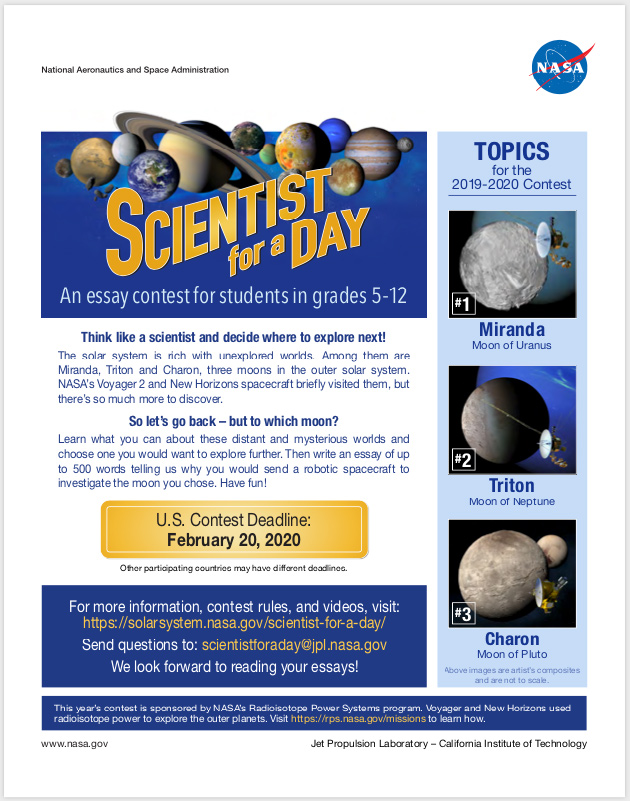 more resources ›
NASA’s Parker Solar Probe began its fourth solar encounter on Jan. 23, at a distance of about 23.3 million miles from the Sun’s surface.

OSIRIS-REx Completes Closest Flyover of Sample Site Nightingale
NASA has finalized the first 16 science experiments and technology demonstrations, ranging from chemistry to communications, to be delivered to the surface of the Moon under the Artemis program.

First Commercial Moon Delivery Assignments to Advance Artemis
Launched in 2003, Spitzer revealed previously hidden features of known cosmic objects and led to discoveries and insights spanning from our own solar system to nearly the edge of the universe.

NASA Celebrates the Legacy of the Spitzer Space Telescope
NASA is exploring technologies that could grow structures out of fungi to become our future homes in the stars, and perhaps lead to more sustainable ways of living on Earth as well.

Could Future Homes on the Moon and Mars Be Made of Fungi?
Recently, A NASA scientist analyzed the age of the Yarrabubba meteor crater in Australia and found it to be 2.229 billion years old, making it now the oldest crater currently known.

Australian Meteor Crater is the Oldest Known
Members of the public have an opportunity to vote for their favorite name for NASA's next Mars rover. More than 28,000 essays were submitted after the contest began on Aug. 28 last year.

Nine Finalists Chosen in NASA's Mars 2020 Rover Naming Contest
Engineers did not have exoplanet science in mind when they designed the Spitzer Space Telescope in the 1990s, but thanks solid engineering, Spitzer’s observational powers were used far beyond original expectations.

10 Things Spitzer Taught Us About Exoplanets
An emerging idea, bolstered by three decades of science, is that there are "Goldilocks stars" — not too hot, not too cool, and above all, not too violent to host life-friendly planets.

Goldilocks Stars Are Best Places to Look for Life
One of NASA's four Great Observatories, Spitzer launched on Aug. 25, 2003, and has studied the cosmos in infrared light. Its breathtaking images have revealed the beauty of the infrared universe.

NASA Says Goodbye to One of Agency's Great Observatories
NASA’s Lucy mission team is seeing double after discovering that Eurybates, the asteroid the spacecraft has targeted for flyby in 2027, has a small moon. This bonus science opportunity was discovered by the Hubble Space Telescope.