Uranus is the seventh planet from the Sun, and has the third-largest diameter in our solar system. It was the first planet found with the aid of a telescope, Uranus was discovered in 1781 by astronomer William Herschel, although he originally thought it was either a comet or a star.

It was two years later that the object was universally accepted as a new planet, in part because of observations by astronomer Johann Elert Bode. Herschel tried unsuccessfully to name his discovery Georgium Sidus after King George III. Instead, the scientific community accepted Bode's suggestion to name it Uranus, the Greek god of the sky, as suggested by Bode.​

Ten Things to Know About Uranus
1

Uranus is about four times wider than Earth. If Earth were a large apple, Uranus would be the size of a basketball.

Uranus orbits our Sun, a star, and is the seventh planet from the Sun at a distance of about 1.8 billion miles (2.9 billion kilometers).

Uranus takes about 17 hours to rotate once (a Uranian day), and about 84 Earth years to complete an orbit of the Sun (a Uranian year).

Uranus is an ice giant. Most of its mass is a hot, dense fluid of "icy" materials – water, methane and ammonia – above a small rocky core.

Uranus has an atmosphere made mostly of molecular hydrogen and atomic helium, with a small amount of methane.

Uranus has 27 known moons, and they are named after characters from the works of William Shakespeare and Alexander Pope.

The Other Ringed World

Uranus has 13 known rings. The inner rings are narrow and dark and the outer rings are brightly colored.

Voyager 2 is the only spacecraft to fly by Uranus. No spacecraft has orbited this distant planet to study it at length and up close.

Uranus cannot support life as we know it.

Like Venus, Uranus rotates east to west. But Uranus is unique in that it rotates on its side.

Uranus is the "butt" of more than a few jokes and witty (and not so witty) puns, but it's also a frequent destination in various fictional stories, such as the video game Mass Effect and TV shows like "Doctor Who." The radioactive element uranium was named after Uranus when it was discovered in 1789, just eight years after the planet was discovered. 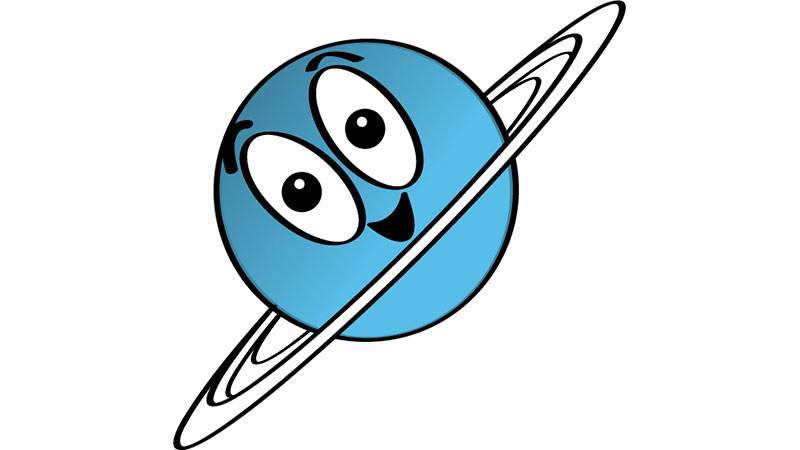 Uranus is made of water, methane, and ammonia fluids above a small rocky center. Its atmosphere is made of hydrogen and helium like Jupiter and Saturn, but it also has methane. The methane makes Uranus blue.

Uranus also has faint rings. The inner rings are narrow and dark. The outer rings are brightly colored and easier to see.

Neptune and Uranus have much in common yet their appearances are notably different. Astronomers now have an explanation for why the two planets are different colors.

Why Uranus and Neptune Are Different Colors
NASA’s Hubble Space Telescope has completed this year's grand tour of the outer solar system.

What Are JPL's Lucky Peanuts?
Astronomers have detected X-rays from Uranus for the first time, using NASA’s Chandra X-ray Observatory.

First X-rays from Uranus Discovered
Planetary scientist Geronimo Villanueva created the sunset simulations while building a tool for a possible mission to Uranus.

NASA Scientist Simulates Sunsets on Other Worlds
Unbeknownst to scientists, 34 years ago Voyager 2 flew through a plasmoid, a giant magnetic bubble that may have been whisking Uranus’s atmosphere out to space.

Revisiting Decades-Old Voyager 2 Data, Scientists Find One More Secret
The Voyager imaging team asked for the photo to show Earth’s vulnerability — to illustrate how small, fragile and irreplaceable it is on a cosmic scale.

10 Things You Might Not Know About Voyager's Famous 'Pale Blue Dot' Photo
Our solar system is a stormy place. Join us on a tour of storms.

10+ Things: Tour of Storms Across the Solar System
The next-generation radiometer is being developed to study the atmospheres of Uranus or Neptune, but could be used to study any atmosphere.

Women at the Helm
Hubble uncovered a new dark storm on Neptune and provided a fresh look at a long-lived storm on Uranus.

Hubble Reveals Dynamic Atmospheres of Uranus, Neptune
Hydrogen sulfide, the gas that gives rotten eggs their distinctive odor, has been verified as one of the key components of clouds at Uranus.

What Uranus Cloud Tops Have in Common With Rotten Eggs
We're talking about the ice giants. These are two enormous planets in our outer solar system: Uranus and Neptune.

Gravity Assist: Ice Giants (Uranus & Neptune) with Amy Simon
Ten things to know about Voyager 2 on the 40th anniversary of its launch.

1986: Voyager at Uranus
In a flurry of new moon discoveries in late 2000 and early 2001, it was announced by this author - and several other sources - that the planet Uranus had 21 moons.

Uranus 'Loses' a Moon: The 'New' Official Moon Count of the Solar System
Dr. Stone, JPL's director since 1991, is stepping down on May 1.

A Conversation with Dr. Ed Stone
The first unmanned space probe flyby in history of the planet Uranus by Voyager 2 on January 24, 1986 should have been an exciting one in the history of planetary exploration.

Fifteenth Anniversary of Voyager 2 Flyby of Uranus in 1986
What do you get if you mix together one part helium and five-and-a-half parts hydrogen, add a dash of methane, heat to 60 Kelvins (-351 degrees F) and let sit for over four billion years?

Recipe for Neptune Revealed by Scientists
If springtime on Earth were anything like it will be on Uranus, we would be experiencing waves of massive storms, each one covering the country from Kansas to New York, with temperatures of 300 degrees below zero.