Our home planet is the third planet from the Sun, and the only place we know of so far that’s inhabited by living things. While Earth is only the fifth largest planet in the solar system, it is the only world in our solar system with liquid water on the surface. Just slightly larger than nearby Venus, Earth is the biggest of the four planets closest to the Sun, all of which are made of rock and metal.

The name Earth is at least 1,000 years old. All of the planets, except for Earth, were named after Greek and Roman gods and goddesses. However, the name Earth is a Germanic word, which simply means “the ground.”

Earth has a very hospitable temperature and mix of chemicals that have made life abundant here. Most notably, Earth is unique in that most of our planet is covered in liquid water, since the temperature allows liquid water to exist for extended periods of time. Earth's vast oceans provided a convenient place for life to begin about 3.8 billion years ago.

Some of the features of our planet that make it great for sustaining life are changing due to the ongoing effects of climate change. To find out more visit our sister website, climate.nasa.gov.

With a radius of 3,959 miles (6,371 kilometers), Earth is the biggest of the terrestrial planets and the fifth largest planet overall.

It takes about eight minutes for light from the Sun to reach our planet.

As Earth orbits the Sun, it completes one rotation every 23.9 hours. It takes 365.25 days to complete one trip around the Sun. That extra quarter of a day presents a challenge to our calendar system, which counts one year as 365 days. To keep our yearly calendars consistent with our orbit around the Sun, every four years we add one day. That day is called a leap day, and the year it's added to is called a leap year.

Earth's axis of rotation is tilted 23.4 degrees with respect to the plane of Earth's orbit around the Sun. This tilt causes our yearly cycle of seasons. During part of the year, the northern hemisphere is tilted toward the Sun, and the southern hemisphere is tilted away. With the Sun higher in the sky, solar heating is greater in the north producing summer there. Less direct solar heating produces winter in the south. Six months later, the situation is reversed. When spring and fall begin, both hemispheres receive roughly equal amounts of heat from the Sun.

Earth is the only planet that has a single moon. Our Moon is the brightest and most familiar object in the night sky. In many ways, the Moon is responsible for making Earth such a great home. It stabilizes our planet's wobble, which has made the climate less variable over thousands of years.

Earth sometimes temporarily hosts orbiting asteroids or large rocks. They are typically trapped by Earth's gravity for a few months or years before returning to an orbit around the Sun. Some asteroids will be in a long “dance” with Earth as both orbit the Sun.

Some moons are bits of rock that were captured by a planet's gravity, but our Moon is likely the result of a collision billions of years ago. When Earth was a young planet, a large chunk of rock smashed into it, displacing a portion of Earth's interior. The resulting chunks clumped together and formed our Moon. With a radius of 1,080 miles (1,738 kilometers), the Moon is the fifth largest moon in our solar system (after Ganymede, Titan, Callisto, and Io).

Earth has no rings.

When the solar system settled into its current layout about 4.5 billion years ago, Earth formed when gravity pulled swirling gas and dust in to become the third planet from the Sun. Like its fellow terrestrial planets, Earth has a central core, a rocky mantle, and a solid crust. 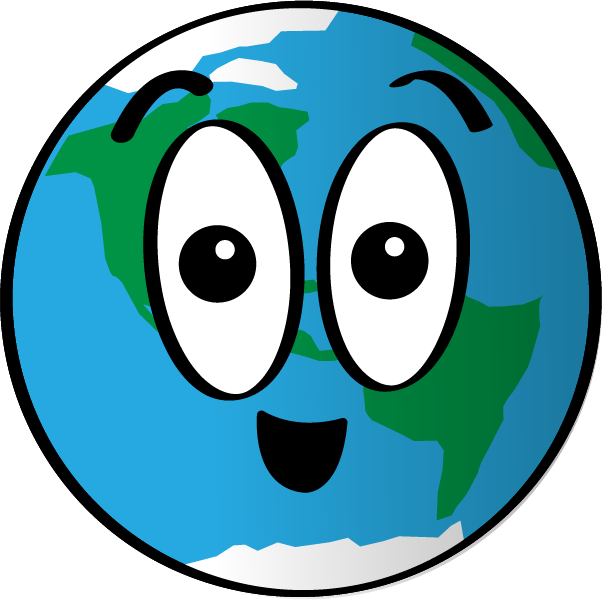 Our home planet Earth is a rocky, terrestrial planet. It has a solid and active surface with mountains, valleys, canyons, plains and so much more. Earth is special because it is an ocean planet. Water covers 70% of Earth's surface.

Earth's atmosphere is made mostly of nitrogen and has plenty of oxygen for us to breathe. The atmosphere also protects us from incoming meteoroids, most of which break up before they can hit the surface.

Earth is composed of four main layers, starting with an inner core at the planet's center, enveloped by the outer core, mantle, and crust.

In between the outer core and crust is the mantle, the thickest layer. This hot, viscous mixture of molten rock is about 1,800 miles (2,900 kilometers) thick and has the consistency of caramel. The outermost layer, Earth's crust, goes about 19 miles (30 kilometers) deep on average on land. At the bottom of the ocean, the crust is thinner and extends about 3 miles (5 kilometers) from the seafloor to the top of the mantle.

Like Mars and Venus, Earth has volcanoes, mountains, and valleys. Earth's lithosphere, which includes the crust (both continental and oceanic) and the upper mantle, is divided into huge plates that are constantly moving. For example, the North American plate moves west over the Pacific Ocean basin, roughly at a rate equal to the growth of our fingernails. Earthquakes result when plates grind past one another, ride up over one another, collide to make mountains, or split and separate.

Earth's global ocean, which covers nearly 70% of the planet's surface, has an average depth of about 2.5 miles (4 kilometers) and contains 97% of Earth's water. Almost all of Earth's volcanoes are hidden under these oceans. Hawaii's Mauna Kea volcano is taller from base to summit than Mount Everest, but most of it is underwater. Earth's longest mountain range is also underwater, at the bottom of the Arctic and Atlantic oceans. It is four times longer than the Andes, Rockies and Himalayas combined.

Near the surface, Earth has an atmosphere that consists of 78% nitrogen, 21% oxygen, and 1% other gases such as argon, carbon dioxide, and neon. The atmosphere affects Earth's long-term climate and short-term local weather and shields us from much of the harmful radiation coming from the Sun. It also protects us from meteoroids, most of which burn up in the atmosphere, seen as meteors in the night sky, before they can strike the surface as meteorites.

Our planet's rapid rotation and molten nickel-iron core give rise to a magnetic field, which the solar wind distorts into a teardrop shape in space. (The solar wind is a stream of charged particles continuously ejected from the Sun.) When charged particles from the solar wind become trapped in Earth's magnetic field, they collide with air molecules above our planet's magnetic poles. These air molecules then begin to glow and cause aurorae, or the northern and southern lights.

The magnetic field is what causes compass needles to point to the North Pole regardless of which way you turn. But the magnetic polarity of Earth can change, flipping the direction of the magnetic field. The geologic record tells scientists that a magnetic reversal takes place about every 400,000 years on average, but the timing is very irregular. As far as we know, such a magnetic reversal doesn't cause any harm to life on Earth, and a reversal is very unlikely to happen for at least another thousand years. But when it does happen, compass needles are likely to point in many different directions for a few centuries while the switch is being made. And after the switch is completed, they will all point south instead of north.​

Six of these small satellites will work together to create the largest radio telescope ever launched.

First of NASA's SunRISE SmallSats Rolls Off Production Line
The ECOSTRESS instrument is helping scientists learn why some parts of a wildfire burn more intensely than others.

NASA's Mineral Dust Detector Starts Gathering Data
To most of us, dust is an annoyance. But these tiny particles that float about and settle on surfaces play an important role across the solar system.

Frozen: Ice on Earth and Well Beyond
The Surface Water and Ocean Topography mission will make measurements of over 95% of Earth’s lakes, rivers, and reservoirs.

Ocean Worlds Resources
An instrument on the space station documented how built and natural surfaces responded to record heat in Las Vegas.

NASA's ECOSTRESS Sees Las Vegas Streets Turn Up the Heat
EMIT will analyze dust carried through the atmosphere from dry regions to see what effects it has on the planet.

5 Things to Know About NASA's New Mineral Dust Detector
An agreement between NASA and the U.S. Space Force recently authorized the public release of decades of data on fireball events.

NASA Releases Breakthrough Forest Biomass-Carbon Product
A new study finds the speed of sound is slower on Mars and that, mostly, a deep silence prevails.

Mid-Level Solar Flare Erupts From Sun
The number of confirmed exoplanets has crossed the 5,000 mark.

NASA System Predicts Impact of Small Asteroid
Scientists are using data from the air, land, and space to get a better idea of how climate change is affecting Earth’s frozen regions.

Thawing Permafrost Could Leach Microbes, Chemicals Into Environment
NASA satellite data illuminates a critical relationship between low humidity and the outbreak of flu in the U.S.

NASA Finds Each State Has Its Own Climatic Threshold for Flu Outbreaks
Scientists analyzed coastal water quality in the months following a major Southern California wildfire. Their results were eye-opening.

A View of the Red Planet (in Blue)
NASA successfully launched the third in a series of next-generation weather satellites for the National Oceanic and Atmospheric Administration.