Pluto is a dwarf planet in the Kuiper Belt, a donut-shaped region of icy bodies beyond the orbit of Neptune. There may be millions of these icy objects, collectively referred to as Kuiper Belt objects (KBOs) or trans-Neptunian objects (TNOs), in this distant region of our solar system.

Pluto – which is smaller than Earth’s Moon – has a heart-shaped glacier that’s the size of Texas and Oklahoma. This fascinating world has blue skies, spinning moons, mountains as high as the Rockies, and it snows – but the snow is red.

On July 14, 2015, NASA’s New Horizons spacecraft made its historic flight through the Pluto system – providing the first close-up images of Pluto and its moons and collecting other data that has transformed our understanding of these mysterious worlds on the solar system’s outer frontier.

In the years since that groundbreaking flyby, nearly every conjecture about Pluto possibly being an inert ball of ice has been thrown out the window or flipped on its head.

“It’s clear to me that the solar system saved the best for last!” said Alan Stern, New Horizons principal investigator from the Southwest Research Institute, Boulder, Colorado. “We could not have explored a more fascinating or scientifically important planet at the edge of our solar system. The New Horizons team worked for 15 years to plan and execute this flyby and Pluto paid us back in spades!”

10 Things to Know About Pluto
1

Pluto orbits the Sun about 3.6 billion miles (5.8 billion km) away on average, about 40 times as far as Earth, in a region called the Kuiper Belt.

Small in Size, But Not in Importance

Pluto is officially classified as a dwarf planet.

Pluto has a thin atmosphere of nitrogen, methane and carbon monoxide. The atmosphere has a blue tint and distinct layers of haze.

Pluto has 5 moons. The largest, Charon, is so big that Pluto and Charon orbit each other like a double planet.

Pluto has no ring system.

The only spacecraft to visit Pluto is NASA’s New Horizons, which passed close by in July 2015.

From the Mouths of Babes

Venetia Burney, just 11 years old at the time, suggested the name Pluto in 1930.

When Pluto was reclassified in 2006 from a planet to a dwarf planet, there was widespread outrage on behalf of the demoted planet. As the textbooks were updated, the internet spawned memes with Pluto going through a range of emotions, from anger to loneliness. But since the release of New Horizons images showing a very prominent heart-shaped feature on the surface, the sad Pluto meme has given way to a very content, loving Pluto that would like to once again be visited by a spacecraft.

The Disney cartoon character Pluto, Mickey's faithful dog, made his debut in 1930, the same year Tombaugh discovered the dwarf planet. There is speculation that Walt Disney named the animated dog after the recently discovered planet to capitalize on its popularity, but other accounts are less certain of a direct link. But either way, the joke connecting the two, as told in the 1987 Mel Brooks film "Spaceballs" remains:

We were lost. None of us knew where we were. Then Harry starts feeling around on all the trees, and he says, "I got it! We're on Pluto." I say, "Harry, how can ya tell?" And he says, "From the bark, you dummies. From the bark!" 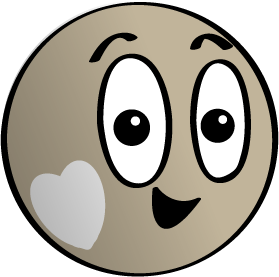 Pluto is a dwarf planet that lies in the Kuiper Belt, an area full of icy bodies and other dwarf planets out past Neptune. Pluto is very small, only about half the width of the United States and its biggest moon Charon is about half the size of Pluto.

Almost all the planets travel around the Sun in nearly perfect circles. But not Pluto. It takes an oval-shaped path with the Sun nowhere near its center. What's more, its path is quite tilted compared to the planets.

NASA has extended the planetary science missions of eight of its spacecraft due to their scientific productivity and potential to deepen our knowledge.

Exploration Extended for 8 Planetary Science Missions
A new study finds the speed of sound is slower on Mars and that, mostly, a deep silence prevails.

10 Things in Space That Come in Twos
A new study finally reveals higher-frequency X-rays and explains why they eluded another mission 30 years ago.

NASA's MRO Finds Water Flowed on Mars Longer Than Previously Thought
Scientists have announced that samples collected by Curiosity are rich in a type of carbon associated with biological processes on Earth.

NASA's Juno: Science Results Offer First 3D View of Jupiter Atmosphere
Researchers have expanded the Pluto photo album to include a portion of the dwarf planet's landscape they're calling the “dark side.”

Using "Charon-light," Researchers Image Pluto's Dark Side in Faint Moonlight
The lives and accomplishments of both women aviation pioneers have now been honored with the naming of landmarks on Pluto.

NASA's Perseverance Sheds More Light on Jezero Crater's Watery Past
The lander cleared enough dust from one solar panel to keep its seismometer on through the summer, allowing scientists to study three big quakes.