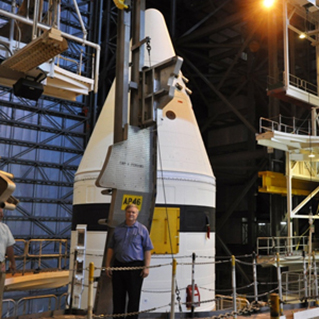 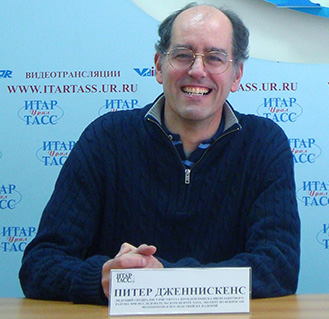 I guess this depends on what you define as a hometown. I was born and raised (until 5th grade) outside of Denver, Colo. Then I moved to Greenwood, Ind. from 6th grade on. I got my undergraduate degree at Hanover College, in Hanover, Ind. Then I moved back to Colorado for graduate school at the University of Colorado at Boulder. I spent eight years there (graduate school, post-doc and two years as a professional) before taking a job with NASA's Goddard Space Flight Center (GSFC) in Greenbelt, Md., in June, 2009. Now I live in Washington, D.C.

Although the space business is hard work, the rewards are more than worth it.

My dad. He is a Ph.D. scientist and college professor (Geology, Earth Science and Astronomy), so throughout my childhood he was always there to encourage my scientific curiosity and answer my questions in all areas of science. We would always do home-based science projects and experiments, and also look up and research answers to how things worked. As a kid, I had a wild imagination.

You have two job titles. First, what is a Research Astrophysicist?

As a Research Astrophysicist, I get to conduct a lot of research, and study science. This research is not limited to the Sun, but most of my time is spent doing research (data analysis) from existing satellite measurements, and trying to answer questions using these data. As more questions come up as a result of our research, I then work on developing new rocket and satellite instruments to try to answer these questions. This is where the groundbreaking science happens.

Second, what is a Deputy Project Scientist for the Solar Dynamics Observatory (SDO)?

As a Deputy Project Scientist, I coordinate science data coming down from the three instruments on SDO and make sure the satellite itself is meeting all of its requirements (telemetry rates, data storage and dispersal, spacecraft health, etc.). This is fun, because I get to meet a lot of great scientists and I am learning a lot about different types of instruments that I haven't had the chance to work with before. It has been an amazing learning experience in both science and management.

A favorite moment in my career has to be my first sounding rocket launch as a graduate student. I was hired to do data analysis for a satellite instrument SEE and help out with a sounding rocket in support of that satellite. At 22 years old, I was building something that was actually going to be launched into space and had full responsibility of some aspects of it with the trust of my mentor, Dr. Tom Woods at the University of Colorado. When it launched on the 12th of August, 2003, I was watching from a mile away. Everything worked perfectly, and I was hooked. I couldn't wait to get back and analyze the data. I dreamed of having my own rocket in the future. In my short career, I have worked on six sounding rockets and one satellite, the Solar Dynamics Observatory (SDO), which launched in early 2010. On all of these projects, I have played a significant role in building and testing the instruments on them.

Take it! Although the space business is hard work, the rewards are more than worth it. You will discover things that no one has ever thought of before, and do things that no one has ever done before. There is no other job like it out there. There will be some disappointments along the way that come with the job and in the schooling and training leading up to it (I've definitely had my share), but it makes the successes seem that much greater. So, don't get discouraged along the path, and keep working as hard as you can. Also, take as many science, math, and engineering courses as possible. Even if they may not seem to be relevant at the time, they are all worthwhile.

There are many things (yes, I do have a life outside of work)! I love camping and hiking, and although I miss doing this in the Rockies, there are still plenty of great places in the East now that I have moved out here. I also play a lot of sports and exercise for fun, including rugby, basketball, golf, running, weightlifting, and biking. These help me relieve a lot of stress that comes with the job. I also like to play guitar. Dave Matthews, Jack Johnson, and Dispatch are a few of the bands I like to cover. I have tried writing my own songs, but they end up being very bad, depressing country songs, so instead, I will focus my creative thoughts on designing the next new solar observing rocket instrument.

Work hard and you can do anything you want to do. This world is based on science, math and engineering. If you are skilled in any of these subjects, or better yet a combination of the three, you can do whatever you want. I was never the smartest person, but I worked hard and have degrees in Physics and Math (undergraduate) and Aerospace Engineering (M.S. and Ph.D.), and it is the combination of these that have led me to become an experimental scientist. I know the science, I know the math, and I know how to build things. I am also working at a NASA center and leading the development of the next generation of satellite and rocket instruments to push the frontiers of science.