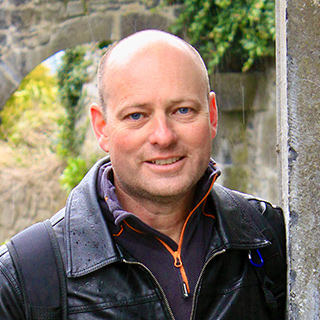 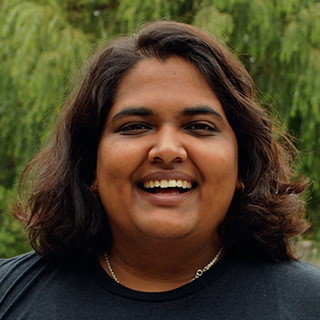 “Star Trek’s” Geordi La Forge – a blind, Black engineer played by actor LeVar Burton – and a garden planted by a grandmother she never met inspired LaShelle Spencer to “boldly plant” where few gardeners have planted before. She tells us how she went from wanting to be an engineer to becoming a gardener with the International Space Station.

It was 1987 and it was the first time that I saw “Star Trek: The Next Generation.” I watched the pilot episode as a child and I've been hooked on space and science ever since. I wanted to be an engineer just like Enterprise Chief Engineer Geordi La Forge because you can't “boldly go” without engines.

I went to college and spent two years studying engineering, but I wasn’t very good at math. Then, I ran out of money for school, which a lot of people can identify with, so I had to go home and sit out college for a semester. During that time I kept a garden – which was inspired by my grandmother, whom I never met as she passed away before I was born. I loved it. I grew all these plants that I had never grown before. When I finally got my money together for the next semester, I thought, "Well, the math's not working out." Even though I loved engineering, and excelled in the parts that did not have math, I changed my major to plant science.

After I changed my major, I found out that Tuskegee University had a long collaboration with NASA for space food production research. I joined the program and was placed with Dr. Desmond Mortley, a research professor of plant and soil science at Tuskegee, and the lead for a lot of the work with NASA. We evaluated crops like sweet potatoes and peanuts in hydroponic systems in the hope that they would one day be grown on the Moon or Mars. By deciding to study plant science, I ended up growing and studying plants for use in space as an undergraduate student.

I ended up getting two internships through the collaboration that NASA had with Tuskegee, which led me to a full-time job. My first internship was at the Kennedy Space Center when I was an undergrad.

My second internship was during graduate school. For my master's degree research, I grew carrots in a hydroponic system for space applications. While giving a poster presentation at a conference about my carrot research, I met my previous NASA manager. He asked if I wanted another internship, and I said, “Sure!”

Later, after I left Tuskegee, I got a call from my manager – the same manager who offered me the second internship. He said, "I have a job. It's not growing plants, but I'm confident that you will excel at it because you were always busy when you were here. We never saw you sitting around, you were always asking questions and busy in the lab.”

I decided to accept his offer, so my first full-time job was not growing plants. It was in the microbiology lab screening filters that would be stored for long durations, and then used to filter potable water. I spent the next couple of years working in the micro lab, then another seven in analytical chemistry, which led to my transition back to plants in the Space Food Crop Production Facility.

I’m the lead horticulturalist in the Space Crop Food Production Facility at Kennedy Space Center, where we screen new crops for space flight applications. I'm the person who selects the plants, grows them, and reports data to the NASA principal investigator. They use my data to determine if the plants are worthy to go to space.

That means bringing in many different kinds of leafy greens, tomatoes, peppers, legumes, microgreens, and strawberries – then seeing how well they grow in mission-relevant conditions. Those conditions include low humidity (about 50%), elevated CO2, and an air temperature of about 73℉ (23℃), which is not an environment that a lot of crops like.

Additionally, we evaluate new technologies for delivering water and nutrients to plants in space. Currently, on the International Space Station, we have the Advanced Plant Habitat (APH), which is a mostly automated chamber. There’s also the Vegetable Production System (Veggie), which contains two small gardens tended by astronauts. We hope to eventually do it on a larger scale so that we can supply crews with more fresh crops to eat.

I was the project science team lead for Plant Habitat-04 (PH-04), where we grew Española peppers for the first time in orbit in the Advanced Plant Habitat on the space station. The crew was able to harvest the fruit twice, and they made space tacos out of them. It's really exciting.

We’ll get some of those peppers back to evaluate the fruit for nutritional composition. I think it's pretty cool to touch things that have come back from space. That always shocks me. Every single time, it steals my heart for a moment. I’m like, "Oh my goodness, this is otherworldly."

What advice would you give to others who are interested in a similar career?

Be patient. Career paths, including my own, are oftentimes circuitous. You might meander a bit before you get to where you think you should be. Or you could end up doing something totally different and be happier there than what you thought you were going to be when you started.

Also, don’t be afraid of failure, because our failures are what we learn from the most.

My biggest challenge is being a minority and a woman in STEM. There aren’t many of us. My mom always knew that because of this scarcity, the requirements for us are a lot harder. She told me I would have to work ten times harder than others. To change this, we have to continue to get more Black women into STEM. My mom didn’t raise a quitter. She prepared me and my brother for what we would face in the work world. But harder is not impossible. Don’t be afraid of what is hard. The things worth having aren’t easy to get. And while it’s been harder, it’s been tremendously rewarding.

The answers to our questions about space travel will come through a diversity of thought. We will not get there if we don't have diversity. Geordi La Forge was blind, but he could see what others in the crew could not. Bringing more minorities into science will help NASA meet its goals of long-duration space exploration.

My grandmother inspired me. I grew up in a house that had a yard with grapevines and apple trees and daylilies. I didn't know at the time that her wide variety of flora had an impression on me.

One of my favorite projects was the microbial characterization of space shuttle trash. Yep. It's exactly how it sounds. Prior to the end of the shuttle program, we were able to obtain the trash from their missions like food waste, and galley waste. We examined what types of microbes were present to determine how to process waste in space. We were able to see the days and the lives of the astronauts through their trash.

My second favorite project was PH-04 – the peppers on the space station. I think what's so interesting is that this sets precedent for plant experiments going forward for long-duration crops. It's opened the door for many, many more crops to be grown.

Well, there were some good things that came out of COVID. I was able to expand my ability to grow things, and not just at work. I've grown crops like peppers, lettuce, tomatoes, herbs, and strawberries in hydroponics under LEDs inside my house. Of course, I also keep a garden outside where I grow root crops like sweet potatoes, potatoes, onions, and carrots.

I also enjoy fishing, although I don't catch any fish. And I love to travel. One of the coolest places I’ve been to is Costa Rica – seeing rainforests and volcanoes is very inspiring. I’ve also been wine-tasting in several locations all around the world. So, traveling, cooking, growing plants, and fishing – but not catching anything!

It's actually Orion's Belt. As a child, I walked to the bus stop for school and Orion's Belt would always be there. It was very comforting to me. It reminds me of my early dreams to travel to the stars and be a part of space.