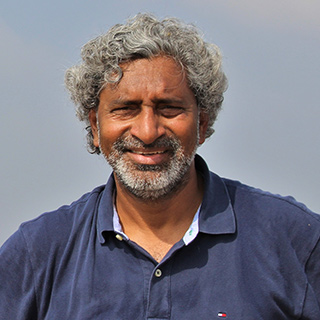 He studied nursing for a few years before a childhood love of rollerblading, “Batman,” and “Star Trek” led Michael Lashore to a career as an engineer at NASA’s Jet Propulsion Laboratory (JPL).

When I was young, I was really fond of Batman. Batman had a lot of gadgets and cool gear. I had never seen anybody with so many things in a belt! The fact that he designed and created his gadgets gave me the idea of putting things together and making new things.

I also watched a lot of “Star Trek: The Next Generation.” I was drawn to the idea of exploring worlds beyond Earth. The mixture of exotic worlds, androids, alien races, cool spaceships, and “Star Trek” Enterprise engineer Geordi La Forge [played by actor LeVar Burton] was like candy for my mind.

So I liked science and I liked space when I was a kid, but when I was older and picking my career, I actually studied nursing for a few years. Then I realized that wasn't what I wanted to do. I was still interested in physics – mainly because of rollerblading. I'm an avid rollerblader and in rollerblading, there's a lot of physics and I just didn't understand it. When I took my first physics class, my mind was just blown. I was like, “How can I find a field where I can make physics part of my career?” And that's how I found engineering.

So my passion for rollerblading, Batman’s gadgets, and “Star Trek” – that’s how I became an engineer at JPL.

"Remember that there are often many paths to get to where you want to go. The trick is finding one that is suitable for you. Let your curiosities and interests in STEM be the battery that powers you."

My thesis project in grad school was sponsored by NASA’s Jet Propulsion Laboratory (JPL). It helped bolster my interest in working in aerospace while providing an opportunity for me to make great connections with people from the Lab. The project advisors I worked with from JPL were extremely supportive; they encouraged me to apply for a job at JPL as my thesis was finishing up, and the rest is history.

I work on the Mars 2020 project, or Mars Perseverance rover, as a robotic operations sample caching subsystem engineer. I help maintain and operate the sample caching system on the rover. That means planning activities a few days in advance, uplinking commands to the rover to execute those activities, and then downlinking an assessment of the rover’s performance.

I also work on a separate task. I'm currently an operations engineer in surface ops. I'm working with the robotic operations sampling and caching service operations team [The team is collecting and storing samples that could be brought to Earth in the future]. That gives me a slightly different role, but my job title is still mechatronics engineer.

Remember that there are often many paths to get to where you want to go. The trick is finding one that is suitable for you. Let your curiosities and interests in STEM be the battery that powers you. My path to becoming an engineer was not a straight shot. I originally planned to work in the medical field out of high school, but I was really interested in physics and the natural world. It was that interest that pushed me to engineering, and helped me reach the place I'm at now.

Communication can make or break a project. It doesn't matter which phase a project is in, communication is always tough. That's something that I still struggle with because it's ever-changing. The pandemic made it even harder because we didn’t have in-person communication, visual cues, and pop-ins at people's cubes.

I overcame my communication challenges by being open with people and being as clear as possible. We're all trying to make sure that we do the work properly so that we have a successful mission.

When I was younger, I was inspired by the people I skated with. They did something that I was very passionate about, but they also had a professional drive, and they became my close friends.

Now, I get inspired by the people at work. For example, seeing how hard a project lead worked to make sure the hardware on the spacecraft was successful. This person also was the glue between the engineers, technicians, and managers. That was motivating for me.

It’s not just engineers who inspire me, but also other people who have a good work ethic, or people who are very compassionate, and who embrace the human side of themselves. We're not robots. We all feel different things and I appreciate the people who are empathetic.

I’ve really enjoyed working on Perseverance. We had a team that met every day for about two years to do the assembly work. We got to see the first motions of all the rover’s mechanisms, and we did tests on the drill. We also did things for birthdays, just fun things. It's great when you're doing good work, and you're also making friends.

I am an avid rollerblader. It's a big part of who I am and, as I explained earlier, another reason why I’m an engineer.

I also am very interested in history and philosophy – learning how we think and why we think the way we think. When I was younger, I didn't really appreciate history, but as I got older I started to realize that a lot of the stuff that we're seeing – it's happened before, and we can learn from that.

I also am pretty big on chess, and I am really into anime. I like sports, including basketball and football.