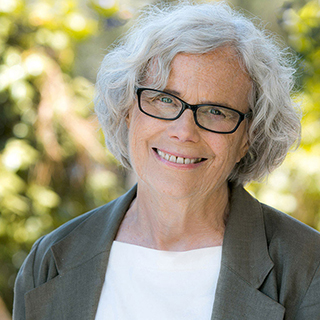 When I was eight or nine, I started reading about Einstein's theory of relativity, and I started asking my parents questions about it – questions they couldn't answer. I realized that I loved trying to figure out how the world works and why things work the way they do. I became very passionate about science, and I realized I wanted to be a scientist from a pretty young age. I just didn't know what area of science.

I also loved theater and performing, which is why I wound up getting a minor in theater in college. I was afraid that I was about to launch into a science career and it would be my last chance to do something I loved. Turns out it wasn't, but that's what I thought at the time.

I hit a turning point in graduate school. The reason I have a master's degree in physics is that I failed the physics Ph.D. program. I thought I wanted to be a physicist and I was in graduate school, and it turned out physics wasn't right for me. What I figured out in the process was that I really wanted to study problems that are important to people's everyday lives. I found oceanography. I fell in love with the ocean and with the idea of doing science about climate change and how the planet's climate is now being impacted by human activity. It took me falling out of physics to figure out what I was really passionate about, and it turned out it was climate change.

"Stay curious. Work hard. And stay curious! Those are the three things in that order. Because the thing that drives science is questions."

After astrophysics didn't work out, I went to the Scripps Institute of Oceanography and started studying how the temperature of seawater changes sea level.

NASA has had satellites measuring sea level since the early ‘90s. Also, other scientists have been dropping thermometers into the ocean for decades. My advisor asked me to see if I could take these two different kinds of data and understand them together, and make one complete story about how the ocean temperature is changing.

I did that research for a small area between Australia, Tasmania, and New Zealand called the Tasman Sea. By combining these two different kinds of data, we were able to get a more complete picture of what the ocean temperature was doing.

After I finished, my advisor said, ”Well, what do you want to do next?” I said, “Well, maybe I want to do the same thing, but for the whole globe.” He said, “Are you sure? That sounds like a lot of work.” I said, “Yes!”

It turned out to be the best career decision I ever made.

When you look at how the temperature has changed in the ocean over the whole planet, what you're really measuring is how much humans have shifted the climate out of balance. It was a really important calculation, and it relied quite heavily on satellites that measure sea level. This launched me on a career path to use data from NASA sea level satellites. First, it was TOPEX Poseidon. TOPEX is the satellite that got me my Ph.D.

After I finished my Ph.D., I started working at NASA’s Jet Propulsion Laboratory (JPL) – a post-doc, continuing the type of work I was doing as a graduate student, but now I was one step closer to the satellites producing the data. After a couple of years, I was hired as a scientist. Then a couple of years later, I was made project scientist for two successor missions to TOPEX, which are named Jason. I wasn't quick enough to get Jason-1, but I wound up becoming the project scientist for both Jason-2 and Jason-3.

There's a new mission called Sentinel-6 Michael Freilich, which is the follow-on to Jason-3. It launched in November 2020 and will release its first data to the public in late June 2021.

Tell us about your work. What do you do?

What's most amazing is to work with this group of about 200 scientists and engineers all over the world, who look at the data to make sure the satellites are as accurate as possible. All that work allows us to say how much the global sea level is rising to within just a few millimeters. To me, this is an incredible technical achievement, but it's also super important for humanity because the rising oceans are one of the biggest potential impacts of climate change. It’s incredibly exciting, and working with the satellites is a lot of fun.

I was also the principal investigator for the NASA mission Oceans Melting Greenland (or OMG, for short), which concluded in 2021. During its six-year mission, OMG collected thousands of measurements of the oceans surrounding Greenland, as well as all of its glaciers, using airplanes and ships. In addition to vastly improving maps of the seafloor along Greenland's coastline, OMG showed that the oceans play a powerful role in controlling the behavior of Greenland's glaciers. Without understanding the role the oceans play, predictions of ice loss from Greenland would fall woefully short. Probably the most fun part of my job was flying around Greenland in a little airplane and dropping things out of it, and then using data gathered by those devices to understand how the oceans are melting Greenland's ice, and what that means for future sea level rise.

Stay curious. Work hard. And stay curious! Those are the three things in that order. Because the thing that drives science is questions. It started for me when I was a kid and my parents couldn't answer my questions anymore. Ever since, I've been trying to understand more and more about the world. That's what drives science. That's what motivates us to do it, because it's a long career path. Counting kindergarten, I went to school for 25 years. It took a long time, but the exciting thing is to get to discover new things about the planet and how it works.

The challenge for me was learning how to be wrong, and realizing that sometimes, this is part of science. To move forward, sometimes we have to take risks and trust that over time, we'll get it right. Eventually, that's what happened to us. After we looked at the data more carefully, we were able to get a consistent picture of what Earth was really doing.

In the process, I learned a really important lesson about how science works. It was like my experience in grad school – I tried one thing (physics), and it wasn't right for me. So the important lesson was that I had to try again.

It was my mom. She was a science teacher. I started this interview with how my parents ran out of answers for me, but it took my mom a long time to run out of answers! She's a smart lady. She loves education and she loves science, and she passed all those things on to me and inspired me to keep asking questions even when she didn't have the answers.

OMG has to be my favorite because I really got to do that one from start to finish. I wrote the proposal with some colleagues. Watching it come together and then actually making it to Greenland and collecting this data has been really fun. Not just because I get to fly around in little airplanes (like the DC-3, which looks like the plane Indiana Jones flew on). But also because we've discovered some really exciting things about how the oceans are melting away the ice in Greenland.

The question we asked when we started OMG was, “How important are the oceans?” We've been able to answer that again and again, and the answer is "More important than we thought."

About the acronym OMG – I'm also passionate about acting and comedy. When I was starting to write the proposal for OMG, I also started taking comedy classes at The Second City in Hollywood. It helped inspire me to create the name OMG, which was really perfect for this project. Those three words: oceans, melting, Greenland, explain everything you need to know about the science we're doing. And they tell you a really surprising fact … one, you probably didn't know. And that makes people say, “OMG!”

I love to make people laugh. And I do improvisational theater and comedy, and occasionally I do Elvis impersonations. (If you search for Climate Elvis, you can watch me sing an Elvis song about global warming.)

My favorite images are the pictures of Earth and the Moon from the Deep Space Climate Observatory (DSCOVR) satellite’s Earth Polychromatic Imaging Camera (EPIC).

It reminds me of the Pale Blue Dot image – when Voyager was headed away from Earth, and then turned back and took a picture where Earth was just one tiny, little blue dot. DSCOVR gives a similar perspective, but you get a lot better resolution than the Blue Dot.

When I talk about climate change to the public, I often start with one of those EPIC photographs. The one that I've been using lately is one with the Moon peeking over Earth's shoulder. I just love it because it's us. We're all in that photo. It's a global selfie, right?

Also, it reminds people that NASA is looking back at Earth, and that the planet that we live on is – in a lot of ways – the one that needs the most cameras and instruments looking back at it. Because we only have one planet to live on for now.