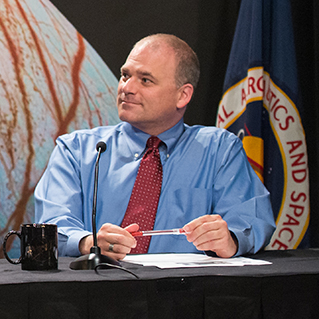 When I was about 9 or 10, my Christmas present from my parents was one of those mini-planetariums that you could put in your room and it projected stars on the ceiling. My dad and I bought glow-in-the dark stars that you could stick to the ceiling and it would trace out the patterns of the constellations.

Did you know at that time you wanted to become an engineer?

I always knew that I liked math and science. I had excellent guidance from the guidance counselors at my high school, since, at that time, I didn't even know what an engineer was. They were the ones to help me realize that this was a field that was perfect for the stuff that I liked to do. In college, I learned there was a major for people who wanted to go into space: aerospace engineering.

Tell us about your path to JPL.

I knew I wanted to be working in the space industry after I started my college degree. I got my bachelor's in engineering and then decided I wanted to go for my master's at the University of Illinois. I knew that JPL was my number one dream job. I watched the Mars Curiosity rover landing in 2012 and two weeks later, I got an email that JPL was recruiting, so I signed up right away, and that's how I ended up working at JPL.

Where were you when Curiosity landed on Mars?

I made all my friends go and sit with me and watch it in my grad student apartment.

Who inspired you to do what you do?

When I think back, the people I feel most inspired by were my high school physics teacher and calculus teacher. Their enthusiasm about physics and math made me feel like it was okay for me to be enthusiastic about them, too. They really encouraged me to become an engineer.

At JPL, Mimi Aung was the one who recruited me at the University of Illinois. I keep her up to date on how things are going. She has been working on a lot of really impressive things.

Tell us about the beginning of your career at JPL.

I started on Aug. 5, 2013, the one-year anniversary of Curiosity's landing. My first job was to work as an attitude control engineer on the Cassini spacecraft. An attitude control engineer works on the orientation of the spacecraft, making sure the cameras are pointed in the right direction and that kind of thing. I was hired to work on Cassini for the last few years of its life, doing all of the fun stuff in the Grand Finale.

Now that Cassini has ended, I will be doing a similar job, except on the design side, for Europa Clipper.

Do you have a favorite memory from Cassini?

That's hard because the end of Cassini was so exciting and fresh in my memory, but I think, still, my favorite memory was the first images coming down from the spacecraft that I had written the commands to take. Opening the website and looking at the images and knowing that those were taken because I had pointed the camera in the right direction was amazing. I still have the very first ones saved on my computer. They're of Saturn's moon Titan, during a Titan approach.

The Grand Finale was really fun and sad. There were so many people on Cassini who had worked on the mission for 20 years. Even though I had only been on the project for four years, it really felt like a family. I felt like I really knew all of the people on the project. I was sad to lose the spacecraft that we talked to every day, and also sad to leave all of the people I had been working with for the first few years of my career.

I was in the mission support area during the plunge -- the room where lots of critical mission events happen at JPL, including rover landings. When I watched the Curiosity landing with my friends in 2012, my friends joked that if I were ever in that room, I had to dye my hair since "Mohawk Guy" Bobak Ferdowsi did for Curiosity. So, I had a few very small purple streaks in my hair for Cassini, to match all of the purple shirts that Cassini team members wore that day.

As a guidance and control engineer, I have to make sure all of the different parts of the spacecraft are talking to each other. That means a lot of scheduling meetings and making sure the right people are in the room to all agree on something. I also spend a lot of time working on presentations and programming.

We're still at the point of designing the spacecraft. The earliest launch date is 2022, so my portion is about how to orient the spacecraft, but there are people who will be building the structure and the antenna, and there are scientists in charge of their instruments. We all have to make sure everyone knows what everyone else is doing.

The most surprising challenge that I have faced at JPL involved the relationship between scientists and engineers. Scientists and engineers in the field of space exploration are fundamentally at odds – a scientist’s job is to push the boundaries of what’s possible, so we can keep learning and keep exploring. An engineer’s job is to build a machine that works, and make sure it keeps working as long as it was meant to – so we err on the side of safety and simplicity.

What are you most excited about in your career?

Europa Clipper is the first mission dedicated to studying an ocean world. So, I'm really excited to be a part of the spacecraft that will be learning about a place where scientists think there could be some form of life. This is also the first mission that I'm helping to design. I'm really excited for when the spacecraft is actually put together, and being able to stand next to it and point at the specific parts of it that are there because of me.

Make sure you focus in school. Math and physics are so important for someone in a career like mine. See if you can find people who are interested in the same thing as you, and tell you what schools are better for certain things.

I really like doing “escape rooms.” I recently finished all of the ones at a place in downtown Los Angeles. I also really like going to museums. LA has so many awesome and different types of museums.

What's your favorite space image and why?

Well, one of my personal favorite ones is that first image that I took of Titan. But overall, my favorite space image is “The Day the Earth Smiled.” This was several small photographs stitched together to get a very high-resolution image of Saturn, the rings, and several moons. Also in the image, between the F and E rings, is the Earth and our moon. I love this picture not only because it is a beautiful image of Saturn, but because it serves as a reminder of how small our home is compared with the universe, and how much more there is to explore.