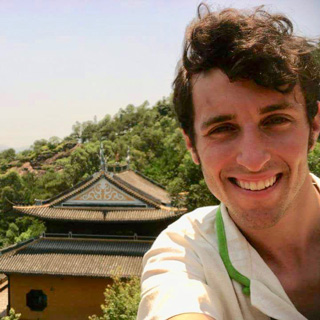 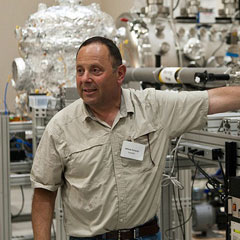 Alan is best known as the principal investigator of the New Horizons mission to explore Pluto and the Kuiper Belt, but his long career in exploration spans the solar system. His space science research spans more than three decades, including key roles in missions such as the upcoming Europa Clipper mission to explore Jupiter's ice-covered ocean moon, the Rosetta mission to orbit a comet and the Lunar Reconnaissance Orbiter, currently orbiting the Moon. He's also done research using sounding rockets and a Space Shuttle-deployed satellite.

He shared the following story of his asteroid research in 2004 while New Horizons was still being constructed for its epic journey to Pluto and beyond.

Strapped into his ejection seat at 15 different points, Dr. Alan Stern feels like a part of the powerful F/A-18 Hornet jet as it hurtles into the stratosphere. He's thrilled to be in the air and back on the hunt.

This isn't a combat mission. Alan is a planetary scientist. And while the U.S. Navy's F/A-18 Hornet is a battle-proven fighter jet, NASA's Armstrong Flight Research Center.

Alan and his colleague, Dr. Daniel Durda, used the modified F/A-18 Hornet with a sophisticated camera system called the Southwest Ultraviolet Imaging System (SWUIS) to search for a group of mountain-sized asteroids between the orbit of Mercury and the Sun that are so elusive and hard to see that scientists aren't even sure they exist.

With Pluto and the Kuiper Belt, it's wide open. It's like the Wild West. You get to be the first to do things. It has its own romance and excitement in addition to the actual research value.

The F/A-18 jet gave Alan a unique view to search for the giant space rocks called Vulcanoids. The twilight is darker at high altitudes, which allows the camera to capture better images. He's also used the orbiting Solar and Heliospheric Observatory (SOHO) spacecraft to search for the elusive objects.

Chasing Vulcanoids was just one exciting chapter in Alan's amazing planetary science career exploring what he calls the Wild West of our solar system -- mysterious, unexplored regions in space that may harbor clues to the origins of our little neighborhood in the Milky Way Galaxy. He loves his work.

Alan is best known as the principal investigator on New Horizons, the first-ever mission to Pluto and the Kuiper Belt. He has made detailed studies of Neptune's largest moon, Triton. Every now and then his desire to learn something new brings him closer to home to study asteroids or the thin atmosphere of the Earth's Moon.

How did you wind up working on New Horizons?

I actually started my career in planetary science with a master's thesis on Pluto. The outer solar system is a wild, wooly place. That region of the solar system is much more primitive. It's much more like the formation days. And because we know so little, we have so much to gain.

When did you know you wanted to be involved in space science?

I would say since I was 7 or 8. I've had this illness a long time ... I just got real excited by the Apollo program and wanted to be part of space exploration.

How did you decide to focus on the planets of our solar system?

I like the planets because they are real places that you can go to and send machines to. Faraway astronomy -- galactic astronomy and extra-galactic astronomy -- is really cool stuff, but to me it's about destinations. I picked the outer solar system because by the time I was in graduate school all the first explorations of Mars and Venus and Jupiter, Saturn and Uranus were already out of the way and there was no chance to get on board something really groundbreaking. With Pluto and the Kuiper Belt, it's wide open. It's like the Wild West. You get to be the first to do things. It has its own romance and excitement in addition to the actual research value.

Study hard. Whether it's atmospheric science, geology or engineering, whatever it might be -- pick something that you really like to do because the hours are long. Go to the best school and hook up with the best people you can find. But also take some time out to be a well-rounded person.

Are there any people that inspired you?

John Young, Dave Scott and Harrison Schmidt, Apollo astronauts, all inspired me. If I had to pick people who really inspired me, it would be those guys and Carl Sagan.

I used to fly Cessnas, but I can't talk myself into it anymore. It's pretty hard to get into that Volkswagen once you've driven Mach 1 racers. I like gardening. I like photography. I've written some books and I like writing. But more than anything, I like raising my kids.

I also like my work. And there's way too much exploring to be done for a 40-hour week.