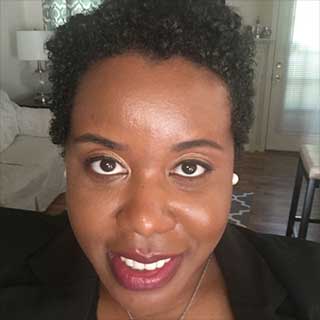 I've loved science for as long as I can remember. Growing up, I was sure I was going to be a doctor...until I took high school chemistry and quickly realized I didn't want to do that for the rest of my life. Through all that and my pivot to writing and communications, I've always been passionate about space. I grew up on classic science fiction and loved thinking about traveling through space and learning more about other planets and places beyond Earth. It wasn’t until I literally arrived at Goddard as an intern that I realized I could make a career out of being professionally obsessed with space and science.

I applied for an internship in the communications office at Goddard for the summer after college! A friend was applying for the internship and suggested I apply, too. I was certain I would never hear back, but I did and the rest is kind of history. I loved working in the Office of Communications, and I came back after grad school to intern with the Earth science communications department. From there, I took an Earth science multimedia fellowship with Universities Space Research Association (USRA) based at Goddard. I've been here ever since.

It depends a lot on the day! Generally speaking, I make videos for the public, sharing new research and updates happening in Earth science across the agency, and I post stories about Earth science on all different social media channels. I work closely with scientists, science writers and other producers to make sure our stories are accurate, interesting and teach our audience something new about our home planet and how NASA studies it. I also get to play a bit, usually working with other social media managers, to come up with fun and weird ways to tell our stories on places like Snapchat and Tumblr. Every so often, I even get to co-opt a meme to talk about Earth science.

Be confident about what you know and honest about what you don’t. My background isn’t in science, so I have to admit to not knowing a lot and ask for explanations of things that might seem pretty basic to scientists or people with more formal training. It can feel a little embarrassing, but it’s not! There’s no shame in not understanding complex science that people have spent years and decades learning, and they’re usually eager to help make it clearer. On the other hand, it’s important to trust yourself and what you know about media and social media. I tend to assume other people know better than me, but I’ve been really encouraged by the great people I work with to speak up with suggestions and ideas, especially when it comes to social media. It’s really satisfying to see an idea I had play out and be successful, especially since I can watch the audience’s responses roll in as they come.

I’m not sure I could easily pick one big challenge I’ve overcome, but I can think of one I’m still working on. I think most people are familiar with the term “imposter syndrome,” which is something I struggle with. Especially because I don’t have a science background, I can feel like I’m in over my head and don’t really know what I’m doing. That feeling gets seriously intensified when I’m writing a tweet or Facebook post that will be seen by literally millions of people – I find myself wondering if I’m really the best person for the job. Part of riding out those feelings is still just doing the job and doing it as well as possible. If I don’t understand something, I’ll do additional reading on it and ask scientists to explain it in different ways. Part of surviving imposter syndrome for me is realizing that I don’t know everything and I need to feel comfortable asking for help and acknowledging that I’m not an expert. More than my own ability to do anything, I’ve been really helped by working with some of the most encouraging people in the agency. My managers and coworkers make it clear that they trust what I’m doing and also that they’ll tell me if they disagree. That makes it easier to move forward with my work. They’re also really great about acknowledging successes, and I can’t thank them enough for that. Sometimes when I’m really feeling inadequate, I’ll look back at previous, successful work and their “good job” emails and feel ready to get back in there.

Is it cliché to say my parents inspire me? I don’t really care, because it’s true! My parents are some of the hardest-working, most interesting people I know, and they blow me away with their depths of compassion and love. They’ve always supported my brother’s and my most outlandish interests and desires, and we absolutely would not be where we are without them. They did not balk one bit when I graduated from four years of journalism school and told them I was going to take an internship at NASA. In fact, they celebrated with me and told all their friends and to this day, they’re still excited to share my videos and work. They’re also two of the most creative people I know – both extremely talented writers and photographers with totally different styles. Anytime I have an idea that seems impossible, I think about how they would accomplish it and try to mimic what I think they would do.

It’s hard to beat some of the travel I’ve gotten to do! In October, I flew with Operation IceBridge over Antarctica and really, how can I ever top that? Seeing the ice sheets from just 1,500 feet (457.2 meters) up is really indescribable and I think about it every single day. I’ve also traveled to fly over Alaska and Canada with the Arctic Boreal Vulnerability Experiment (ABoVE) and to a research ship in Seattle with the Export Processes in the Ocean from Remote Sensing (EXPORTS) group. That was all really amazing; this job has literally taken me some places I could never have imagined. Plus, that comes with the added challenge of working on the fly and trying to publish videos and tweets from anywhere I can access the internet, which I find fun and exciting. That said, I’ve also gotten to work on some really wonderful projects. Recently, some of my team created the NASA Explorers digital series about the Cryosphere, and I was so lucky to get to help with the social media strategy for that show. They were developing an entirely new, creative storytelling effort and it was so fun to think about ways to share the stories they were telling. (And you should all watch it!)

I have a black belt in Tae Kwon Do – I haven’t practiced in many years, but I was pretty serious about it as a kid and competed in the World Games and Junior Olympics. I’m actually not sure any of my coworkers know that… One of my current hobbies is baking and decorating sugar cookies. I spent most of last year perfecting a recipe and learning all sorts of different strategies to decorate them. My coworkers definitely know about that because I bring in testers all the time for feedback and to get them out of my apartment before I eat them all.

It’s hard to pick, but I think I’d have to go with this EPIC (Earth Polychromatic Imaging Camera) image of the 2017 total solar eclipse.

Not too long after I started at NASA, I got to work on a video about connections between EPIC images and the search for habitable planets beyond our solar system, and I became slightly obsessed with the instrument. Plus, it just blows my mind! That’s our whole planet, all of us right there, seen from a million miles away! It’s not quite the Pale Blue Dot, but it’s close, and we can get 12-20 of these images every single day. We really do live in the future. During the total solar eclipse, I was home with my parents, who live very close to the path of totality. We knew EPIC was going to capture several images of the Moon’s shadow and I was in charge of producing those into a video and publishing them as soon as possible. I got up at 4 a.m. the day after the eclipse to grab the images as soon as they came down from the satellite and were processed. As a result, I got to be one of the first people to see these images. It was staggering to look at the shadow passing over the central U.S. and think about how I really was in that image. After I published the video, I not-so-patiently waited for my family to wake up so I could show them this picture taken from space of all of us. Also, not for nothing, as a social media person, I love all the wonderful pun opportunities EPIC gives me.