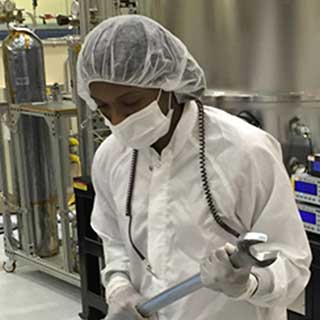 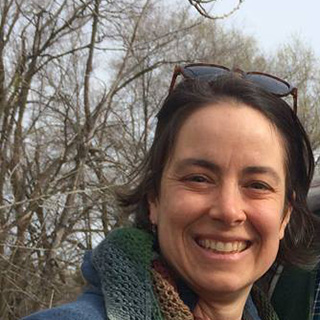 Talk to Tracy Drain for any length of time, and you will hear the word “fun” a lot – even when she's discussing things most people don’t relish. Tests at school? “Oh, they were so much fun!” she exclaims with bright eyes and a smile.

Since she was young, Tracy has loved puzzles and brain teasers. Now, she tackles engineering challenges at JPL like new problem-solving games to enjoy.

Her playful attitude was inherited from her mother, who made sure both she and her kids had toys even though money was always tight.

Drain grew up in Louisville, Kentucky. Her mom worked at McDonald’s and her grandmother was a housekeeper. Drain describes this time in her life as idyllic, running around during the hot Kentucky summers with her older brother and immersing herself in books like "A Wrinkle in Time" and the works of science fiction authors Arthur C. Clarke and Isaac Asimov.

A deeply practical side balances her exuberant spirit. In considering future careers, job security was a major factor. The first member of her family to go to college, she wanted to be sure the investment was worth it. She loved music and was often first clarinet in her class band, but she didn’t see music leading to a financially stable long-term career.

Tracy was attracted to astronomy but didn’t have a clear sense of what career opportunities were available in the field. She decided to pursue engineering, choosing mechanical over aerospace since it seemed broad enough to guarantee future employment.

“If I could’ve designed fighter jets, that would’ve been just fine,” she says, and then laughs as she remembers how she wasn’t allowed to play with a toy F-14 Tomcat [fighter plane] that her mom had bought for herself.

Drain didn’t leave aerospace behind – she studied controls and vibration during her master’s studies at Georgia Institute of Technology (Georgia Tech) in Atlanta. Her ball-bearing stress load project had applications for helicopters. That research, as well as summer internships at NASA’s Langley Research Center, helped her get her first job at JPL in 2000. At first, she worked on advanced studies proposals, “pie-in-the-sky stuff, like how would you build an entire robotic outpost on Mars? It was stupid amounts of fun.”

Since then, she’s worked on the Mars Reconnaissance Orbiter, the Kepler mission to discover exoplanets, the Juno mission to Jupiter, and the Psyche mission that will launch in 2022 to study an asteroid. She is now the lead flight system systems engineer for NASA’s Europa Clipper mission, set to launch in 2024 and head back to the Jupiter system – this time to study one of Jupiter’s icy moons. “Europa is one of the most fascinating places in the solar system. Scientists think it contains more water than all the Earth’s oceans combined (times two!) and could possibly have all of the ingredients necessary for life.”

The first time I remember being fascinated by space was when I read about how the solar system formed. The fact that it was formed from a giant cloud of gas and dust spewed out by supernovas and it all came together under gravity and made the Sun and all the planets – I thought it was bananas that scientists could figure all that out based on what they can see today. I remember thinking, "That's really cool that we can know that about space."

When I started thinking in high school about what I wanted to do for my career – math, science, and space seemed like things that could keep me interested for an entire career.

There was a Jet Propulsion Laboratory booth at a career fair that I went to in my second and final year in grad school at the Georgia Institute of Technology. Embarrassingly, I'd never heard of JPL, but once I realized that JPL was the center that did Voyager, Pathfinder, and so many other amazing missions, I practically pounced on the poor recruiters. I got a call sometime later to come interview and practically drooled all over everyone they would let me talk to. I was offered a job by Steve Matousek in the systems engineering division (though I'd never heard the phrase "systems engineering" until I talked to him!).

When you think about a spacecraft and all the different parts that are necessary to make a spacecraft work, there are engineers who focus on making each of those specific systems. But a flight systems engineer is responsible for knowing enough about all those things that we can make sure they come together in a design that will accomplish the overall goals of the mission.

The things I do on a day-to-day basis change over the course of the life cycle of a mission. Early on, you're involved in the requirements and rules the design has to follow so you can meet your mission goals. So you work with people at all the different levels to develop the requirements and make sure all those rules are written properly. Then systems engineers are involved with verifying those requirements and developing tests and sitting in on the tests.

Then after launch and during operations, you're flying the spacecraft. In the past, I have helped develop command products that would be sent to the spacecraft to make it do activities, and I’ve monitored information that's coming down from the spacecraft, making sure it's responding the way it's supposed to. In most of my roles in ops, when things go differently than we expect, I work to guide the team through understanding what went wrong and figuring out what to do about it to get the mission back on track.

It makes for a very exciting, never dull, kind of job.

I really wish someone had told me that the important thing about being a scientist or an engineer is learning how to think critically, learning how to be creative, learning problem solving, and learning how to learn so that you get a fundamental understanding of things so you can attack new problems you've never seen before.

When I was in middle school and high school, the way the school system seemed to work was to make you focus on getting a grade – "How do I get my A?" You're drowning in so much homework that you're looking for the shortcuts to get an A, and that is not the best way to really learn the material deeply and foster that high level of critical thinking. I think I would have had a different educational experience if I was able to shift my focus to that.

My mom was always very excited about airplanes and spacecraft and anything to do with space, whether it was real or fiction. She was always pointing out airplanes overhead and having us watch space shuttle launches on TV. She was very big into "Star Trek," "Star Wars," "Battlestar Galactica," and all of that stuff. So I soaked that all in from her.

She was always very supportive of anything I wanted to do or try. She was never a person to say, "You can't do that" or, "You shouldn't do that." It was always, "OK! What are we going to do to make that happen?"

I also had some really cool teachers through middle school and high school. I was in math competitions in high school, and I remember one day we were all in a minivan driving down the freeway to a competition with my ninth-grade math teacher, Mrs. Brown. In Kentucky, freeways run through big chops in hills, and in the winter, water will flow down the vertical face and freeze into these giant icicles. As we drove by, I said, "I've always wanted to break off one of those." She said, "OK!" and pulled over, instilling in me this idea that you should go explore things that you want to do. That was something that reminded me to take those opportunities and be an exploring person, because why not?

The Mars Reconnaissance Orbiter launch will be one of my favorite memories for a long time. I got to be one of the “Aces” – the engineers who communicate with the Deep Space Network when we're sending commands to (and monitoring the downlink signal from) the spacecraft. It was my first launch, and I discovered there are few things as thrilling as being in the control room while counting down to liftoff for a mission you helped get to the launchpad.

I have a lot of fond memories from Juno operations, too. There were so many adventures along the way! From the spacecraft entering safe mode during Earth flyby, to the propulsion check valve issue just before the planned Period Reduction Maneuver in orbit at Jupiter, to the computer reboot a couple of months into the science mission.

While those times could be scary, they were also great opportunities for the team to be creative in handling the issues fostered great team bonding. And who can forget the amazing images that Juno has sent back – the visible and infrared images of the poles, in particular, are just breathtaking.

I’m also looking forward to all the awesome science that is going to come from the Psyche and Europa Clipper missions.

I read a lot. It used to be 100% science fiction and fantasy, but several years ago I discovered the world of nonfiction. I just wander through the stacks of the library (well, these days, mostly virtual electronic stacks) and pick up whatever catches my attention. I also love watching movies – and similarly, while I used to focus on sci-fi and fantasy, some years ago I discovered and fell in love with documentaries.

I also like studying languages: I’ve been working on my Spanish fluency for years. Most recently though, I have gotten totally sucked into the world of Korean dramas. About a year ago I decided to just dig in and learn to read, write, and speak Korean, too. That way I can claim all those hours spent immersed in the shows are still educational, LOL.