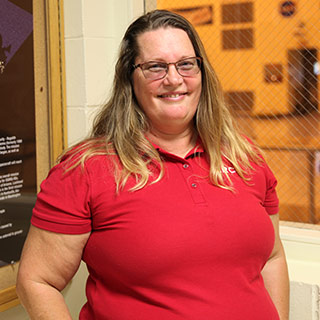 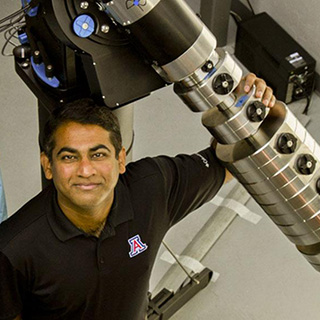 I grew up in Hendersonville, Tennessee, a town outside of Nashville.

When I was in middle school, we had a printer that would print out every morning NASA's Astronomy Picture of the Day. I saw these really beautiful photos of nebulae and galaxies, and the blurb underneath each one gave an explanation of the photo, including the science behind it. That's when I really started to get more interested in and intrigued by astronomy.

My parents saw my interest in astronomy and they bought me a small telescope that I still have. I used it to start looking at cool things like Saturn. The first time I looked at Saturn, I thought it was a sticker that someone put as a joke on the front of the telescope. It was really amazing to see something that had previously just been a point in the sky, to see the rings around it, which was pretty incredible. Then I turned my telescope to the Orion Nebula and could see the gas and dust clouds forming brand new stars. I was absolutely blown away.

As a kid, I enjoyed science, engineering, and art, and I was looking into professions that could combine all three. Astronomy seemed to be a natural intersection of these three: I could pursue science and work a little on engineering by working with instrumentation and telescopes, and I saw the art in not only astrophotography but also making science results easily accessible to people in scientific papers. My choice of studying astronomy was also helped by the fact that I am a huge Star Wars fan!

So, going into college, I knew I wanted to be an astronomer. I only looked at colleges that had astronomy degrees. That's how I ended up going to Villanova University for my undergrad and they luckily let me lead research projects — even as a freshman. I also had the opportunity to help run their public observatory and give sky tours to other students. I absolutely cherished being able to share my love of astronomy.

During my undergrad, I first learned about exoplanets, planets outside our solar system, in depth. Most exoplanets have been found through the transit method, in which scientists look for periodic dips in light when an exoplanet crosses in front of its star.

I did a master's degree in space science at University College London, and then my Ph.D. at the University of Arizona's Lunar and Planetary Laboratory, where I focused on transiting exoplanet observations. I came to JPL as a postdoctoral researcher, and then in October 2017, I transitioned to scientist.

Does your background in planetary science help you with studying exoplanets?

In the last few years, with instruments such as Hubble, Spitzer and various ground-based telescopes, we have begun to study exoplanet atmospheres in great detail. For example, we can determine if an exoplanet has a clear, cloudy or hazy sky and measure the types and amounts of molecules in its atmosphere. My background in planetary science has been extremely helpful in my studies of exoplanets because it has given me a strong foundation that I am now able to apply as we conduct detailed characterization with current telescopes, such as Hubble, and future ones, such as NASA’s James Webb Space Telescope.

Guy Consolmagno, definitely. I studied abroad at the Vatican Observatory and he's in charge of it. Sometimes he's called the Pope's astronomer. He's really down to Earth. He also went to the University of Arizona, so I was able to ask him for advice about how to survive graduate school.

I’m also inspired by my parents, who were extremely supportive of my career path, even as a little kid. I am not sure I would be where I am today if it weren’t for them. I’m particularly inspired by my dad who taught me how to explain complex concepts to other people outside of my field. When I am giving public talks about my research, I catch myself sometimes talking with a similar speech pattern to him!

I'm working on ground-based observing of transiting exoplanets, using telescopes to observe the atmospheres of these other worlds. I've personally used the Palomar 200-inch telescope in San Diego County, NASA's IRTF at Mauna Kea in Hawaii, the University of Arizona's 61-inch Kuiper Telescope near Tucson, and the Mayall 4-meter Telescope at Kitt Peak in Arizona.

I'm also working on CASE: a proposed NASA contribution to the European Space Agency’s ARIEL mission, which would study the atmospheres of about 1,000 exoplanets. My simulations have helped to predict CASE’s capability to measure exoplanet atmospheres.

Public outreach is really important to me because I love sharing what I do with other people. Sometimes I get bogged down by processing data, sitting in front of my computer all day, and I forget how interesting the problems I'm working on are. Interacting with the public allows me to reconnect and remember I'm doing cool things. I love talking to people and teaching.

Some of my favorite moments happened while using great ground-based observatories for my own research. When I got interested in astronomy, I read about the amazing instruments at Mauna Kea in Hawaii, and Kitt Peak, as well as Hubble in space, and I dreamed of being able to use these telescopes. When I went to grad school at the University of Arizona’s Lunar and Planetary Laboratory, and I won observing time at Mauna Kea’s Infrared Telescope Facility (IRTF), the Mayall Telescope at Kitt Peak National Observatory, and Hubble — fulfilling my dream. I count myself very lucky to have been able to observe from all of these instruments. One awesome memory I have is standing at the top of Mauna Kea watching the Sun set over the IRTF with Maui in the distance and being able to see the green flash.

Being on the science team of a mission selected for flight would be great.

Continue to work hard and don't give up.

Tell us about a particularly challenging moment in your journey to NASA.

I actually failed a midterm physics exam in high school. Once I realized what I had to do to become a better student, I persevered, and was able to get a 5 out of 5 on the Advanced Placement (AP) exam for physics.

I try not to kill my garden plants! I like going to Disneyland with my wife and riding Big Thunder Mountain and Space Mountain (especially when it is Star Wars themed as "Hyperspace Mountain").

I'm also in two jazz bands: JPL's Jazz Propulsion Band and a group that has a lot of JPL people in it called the Big Band Theory. I play the keytar -- it's a keyboard that's sort of like a guitar, and it's totally nerdy and I love it. I actually got Ben Folds to sign it.

“Earthrise,” the first photo taken by humans of Earth from another celestial body. It was taken during Apollo 8, which was also the first human mission to the Moon. They entered lunar orbit on Christmas Eve, 1968, as well. As they were entering orbit, they talked about many different legends about the dark side of the Moon from many different cultures and at the end basically said, “We will let you know what we see!” Super, super cool (and historic!) photo. The Exoplanet Exploration Program (ExEP) is responsible for discovering and understanding planetary systems around nearby stars.