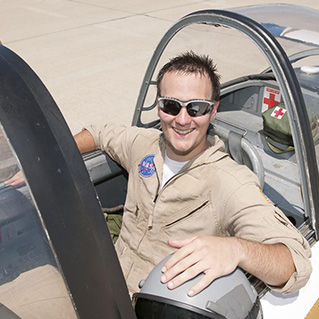 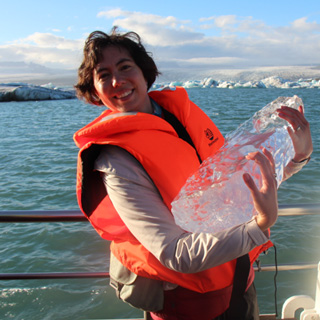 I grew up in Ithaca, New York.

I did a lot of stargazing with my parents growing up. Oftentimes we would spend our vacations in northern Minnesota, far away from any towns and where the night sky is incredible.

My great-grandparents came to the United States with no money and without any knowledge of the English language. Each generation worked hard for their children in order for them to have a better life than their own...I try to live up to that legacy of perseverance and determination.

The Perseid Meteor Shower, which takes place each August, happens to fall near my birthday. My parents and I would stay up late to watch it nearly every year.

My parents are also very interested in geology -- wherever we went they would pick up rocks, or would stop to look at road cuts during car trips. I grew up surrounded by an interest in both space and in the planet we all live on.

Very early on, I decided I wanted to work in planetary exploration. Growing up, I loved watching the show NOVA on PBS, and was particularly interested in any episode concerning spacecraft and the team of scientists and engineers running the spacecraft.

I also worked for two summers as a high school intern for the camera team for the Near Earth Asteroid Rendezvous (NEAR) spacecraft. The team took me to see the spacecraft launch. After that experience, I knew I wanted to make a career of working with spacecraft.

I got a Bachelor of Science in planetary science from the California Institute of Technology, and a M.S. and Ph.D. in planetary geology from Brown University. I came to the Jet Propulsion Laboratory (JPL) as a research postdoc with the intention of getting a job in spacecraft science operations. I'm very pleased that my plan worked out.

My family. My great-grandparents came to the United States with no money and without any knowledge of the English language. Each generation worked hard for their children in order for them to have a better life than their own. My own father became a well-respected university professor. I try to live up to that legacy of perseverance and determination.

What is a Planetary Geologist and Science Systems Engineer?

A planetary geologist is someone who studies the geology of other planets -- unraveling the history of a planet using what we know from how things work on Earth and what we see from our spacecraft. My particular interest focuses on the polar deposits of Mars, which are several kilometer-thick deposits of water ice and dust layers. We think they contain the record of recent climate change on Mars (where "recent" means tens of years, to hundreds of millions of years). We are working on reading that record.

A science systems engineer is a representative for the science team who is embedded in the engineering team for a spacecraft. We act as a bridge to bring science and engineering together, and make sure that as engineering decisions are made; they are made in such a way that will allow us to accomplish as much science as possible within the constraints of the project. In essence, we work to ensure the biggest scientific bang for the engineering buck.

Landing night for the Curiosity rover was incredible. That night, and the days surrounding it, was full of a lot of excitement and very little sleep. As the science operations systems engineer for the mission, I sat with the science team in a basement watching the feed from the control room -- emotions were running VERY high.

After the successful landing, the science team began their first sol of real planning. After spending time working with them to get our planning procedures and tools all set, it was a great experience to see them put it all into action for real.

And then to top it all off, I got to do the press conference for the image of the rover's parachute landing since I am also the HiRISE (High Resolution Imaging Science Experiment) investigation scientist.

Be curious about everything -- take every opportunity that presents itself to learn new things.

I play trombone, do bead work, knit, and read (especially speculative fiction and mysteries). I do a lot of public outreach; I love going out and sharing the exciting things that NASA does with the public. I'm also a mom, so lately my free time has been filled with playing with trains.

Learn how to communicate effectively to a variety of audiences, both in writing and giving presentations. It doesn't do any good to have great ideas if you can't explain them.

Current missions I work on:

Press Conference Concerning the HiRISE Image of MSL During Landing

Press Conference Concerning the HiRISE Images of MSL After Landing

How to Plan Your Flyby

All Eyes on ISON

Snapping a Picture of Curiosity's Landing