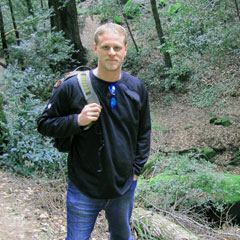 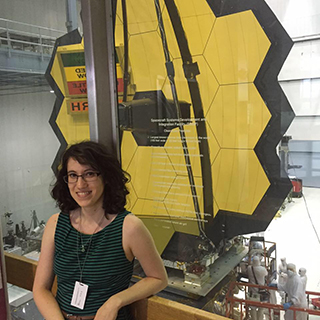 I was born in Warsaw, Poland.

My name may sound uncommon, but in Poland it is a household name. My father -- Henryk Jerzy Chmielewski -- is a famous Polish cartoonist. Since my father is a cartoonist and a funny guy, he decided to name me Artur Bartholomew so that my initials would be: "A.B.C." People still call me: ABC. (Who wants to struggle with "Chmielewski," anyway?)

I always wanted to work for NASA and study space, particularly ever since I found out NASA existed. This was not easy, especially since the communist government in Poland only praised the Russian space program and concealed any NASA triumphs.

In college, I almost failed English 101 because my essays strayed off topic. The professor would write in huge red ink: "Art, every one of your papers veers off topic and ends up discussing life on Mars. No more Mars. There was nothing in the book about Mars!"

Throw yourself into a mix of the brightest people you can find, do hard work for the smartest person you know, soak up the wisdom and before you can say 'General Purpose Heat Source Radioisotope Thermoelectric Generator' you too will be radiating wisdom.

I was excited to study in the US because it brought me "one giant leap" closer to my dream future job at NASA. When my counselor at the University of Michigan asked me what I was interested in, I did not hesitate to say, "space and robots!" "There is no such job," she said. To prove her wrong, I called the Jet Propulsion Laboratory (JPL) every week to ask about job opportunities, but to no avail. I had to change my strategy.

I signed up for job fairs held on campus for various Southern California companies. My interviews went well and I was invited to visit their Los Angeles facilities. I attended my interviews in the morning and in the afternoon drove to JPL to badger the managers there for a job.

On my third attempt, one JPL supervisor told me that while he could not hire me for a space job, my summer work experience at Ford Motor Company qualified me for the JPL electric car program. I took the job without a second thought and, after the project was cancelled, I quickly moved to work on space missions, such as Galileo and Ulysses.

Who or what inspired you?

In college, I was fascinated with the "Murmurs of the Earth" project for the Voyager 1 mission. I avidly followed the collection of sounds, songs and images for the Golden Record mounted on the Voyager 2 spacecraft. I wondered how an alien civilization would interpret the pictures that we were sending out into space. I still question it to this day: Will they think that dolphins fly above the sea with anti-gravity fins? Will aliens look at pictures of our bodies and think that we are really gross?

I also remember when Carl Sagan spoke about extraterrestrial intelligence and I wondered if extraterrestrials would find the recorded whale sounds more pleasing than Chuck Berry.

A project manager is in charge of a space mission. He or she ensures that a spacecraft will function as promised within budget. The most important part of the job is maintaining good information flow among the team.

Several years ago, I was the project manager for a tennis-court-sized inflatable antenna deployed in space. The images of the antenna deploying in space intrigued (then NASA administrator) Dan Goldin, who called JPL and said: "Congratulations on the inflatable antenna. What's next?" In response, JPL and the L'Garde Inc. engineers who had worked on the project brainstormed future ideas. We decided that our long term goal should be building a telescope that could image an Earth-like planet in another star system. After a quick calculation, we realized that 27 telescopes -- each the size of the Rose Bowl -- floating in space and working in tandem were necessary to get a magazine cover picture. When we sheepishly mentioned this to Dr. Goldin the next day, his response was not, as we had feared: "You are a bunch of crazies." Instead, he asked us to create the Gossamer Program. The excitement, inventions and creativity that followed in the next five years were unprecedented. We were creating a new discipline of engineering; everything was surprising and frequently non intuitive.

Throw yourself into a mix of the brightest people you can find, do hard work for the smartest person you know, soak up the wisdom and before you can say "General Purpose Heat Source Radioisotope Thermoelectric Generator" you too will be radiating wisdom.

I love teaching kids how to play competitive tennis. Advanced tennis requires conditioning, speed, technique, reflexes, strength, but most of all mental rigor. It is quite a challenge combining all of these elements (probably harder than building large inflatable space telescopes). Teaching my kids how to play tennis and still be their loving daddy at the same time is tricky business.

I remember reading a series of books by Leo Frankowski. (I think it was called "The Cross Time Engineer.") The protagonist, an engineer, travels back in time to the Middle Ages. Here, in a world without books, the Internet or calculators, he has to depend on his own knowledge. I always tell my kids and students to question themselves when doing homework: "Do I really understand this topic?" "If I were suddenly transferred 500 years in time would I be able to teach people about trigonometry, physics, astronomy?" "Which inventions could I recreate?" "Would I be the smartest person on the planet?" Strive to say "yes!" to all these questions.

More About the Rosetta Mission

From Galileo to Gossamer: 400 Years of Telescope Technology