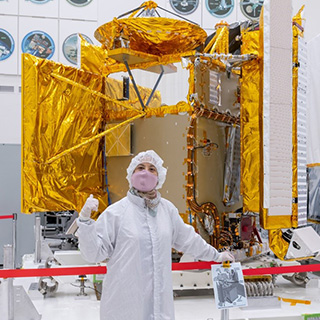 Dr. Maria Zuber led NASA's GRAIL mission to explore the moon. A geophysicist, Maria is an expert on planetary and space sciences. She has more than half a dozen NASA missions under her belt and decades of experience unraveling mysteries from Mercury to Mars and beyond.

Every day I see data that we collected at the moon yesterday that nobody's ever seen before. I never get over the thrill of getting to know something nobody else knows. I'm addicted to it, I admit.

Maria became interested in engineering and space sciences at an early age, thanks to a telescope she built with her grandfather. Using the telescope to spy on Venus and other celestial bodies, Maria began wondering how these distant planets and moons worked on the inside.

Maria carried this interest with her all the way to the GRAIL mission.

GRAIL's goal was to create a detailed map of the moon's gravitational field and internal structure using measurements supplied by its twin spacecraft called Ebb and Flow. The data will also shed light on how the Moon -- and the planets -- formed and evolved.

Maria teamed up with Dr. Sally Ride -- best known as the first American woman to fly in space -- to use GRAIL as a springboard for space sciences education for middle school students across the country.

Ebb and Flow were armed with several cameras -- the first NASA imaging systems included expressly for an education and public outreach project -- that students used to snap pictures of the barren, cratered lunar surface, including the mysterious far side.

"Every day I see data that we collected at the moon yesterday that nobody's ever seen before," Zuber said. "I never get over the thrill of getting to know something nobody else knows. I'm addicted to it, I admit."