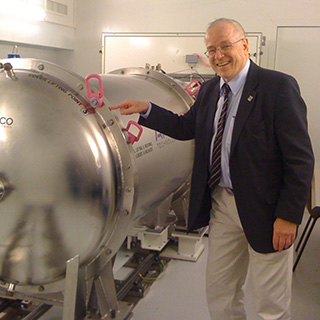 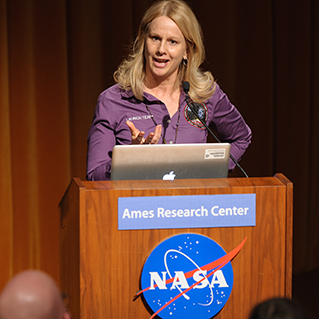 I am an Army "BRAT" (acronym for "Born, Raised, And Trapped") from the USA, and I grew up in many states, mostly those in the Midwest and the South.

Currently, I am based in California while contracting at the Jet Propulsion Laboratory (JPL), but my company is headquartered in Arizona and I work at facilities across the country -- so I'm usually on the road a lot.

I pretty much came out of the womb knowing that I was interested in space science, with "interest" being an understatement: it's either this or insanity.

My parents say that I announced my intent to become a scientist to them in kindergarten, but I had been seriously considering it for a couple of years beforehand. I recall torturing my poor mother with trips to the library to do my "research" as early as three years old, and trying to commit books on solar system astronomy to memory. The first phenomenon I was really interested in researching at the library was the aurora borealis, which I had seen once and which thrilled me to no end. By age eight, my obsession with stars and rocks was painfully obvious to anyone who met me.

When Voyager 2 reached Neptune, I was freaking out over the reports of pink snow on Triton and wanted nothing less than ground truth. Instead of hanging posters of bands or hot guys on my walls, I slept under photos of the Saturnian system and lunar maps. I would comb asteroid lists looking for names for my future first-born. (FYI: I am expecting my first child this year, who will in fact be given the names of an asteroid and a moon that I picked out back in 1986.)

However, my first personal connections with outer space probably had to do with having more opportunities than most other kids my age to see the night sky. Since my parents were in college or graduate school for most of my childhood and my father worked until three or four in the morning, our household was naturally shifted to the night-time hours and we engaged in cheap forms of entertainment, such as low-tech stargazing. As a kid, I could never sleep before midnight (still can't), so I'd just stay up at night thinking, or staring out my window, and this evolved into thinking too hard about what I was staring at.

I pretty much came out of the womb knowing that I was interested in space science, with 'interest' being an understatement: it's either this or insanity.

I double majored in astronomy and geology, as planned, at Vassar and had about four great advisers at any given time. However, I didn't have a major professor who specialized in planetary science. So, during my junior year I asked my geology professor for a copy of the American Geophysical Union (AGU) directory and sent out cold-call emails to anyone and everyone with a planetary science affiliation for advice on graduate schools. Several people were kind enough to respond, including Mike Gaffey (then at Rensselaer Polytechnic Institute (RPI)), Carle Pieters and Jim Head at Brown, and Adrian Brearley and Rhian Jones at the Institute of Meteoritics. These scientists wrote back to me several times with good feedback, provided background on asteroids and meteorites, and generously loaned me samples for my senior thesis work.

Most of my letters of recommendation for grad school were from astronomers, and that, coupled with advice received from the "planetary e-mail campaign," landed me in an interstellar dust group within a computational physics department at Louisiana State University (LSU).

My adviser at LSU, Geoff Clayton, was open to working with me on a dissertation about light scattering in planetary regolith. He introduced me to his collaborator, Mike Wolff, who was then doing atmospheric radiative transfer work for Mars missions (MARCI, CRISM, MER, etc.). Mike hired me on planetary grants through the Space Science Institute, set me up with the tools of the trade and helped me to network with other planetary scientists when I began presenting at conferences.

Josh Bandfield and the folks at Arizona State University (ASU) were the first to really give me exposure in working with Mars mission data and lab and field spectrometers. Allan Treiman at the Lunar and Planetary Institute (LPI) provided me with access to planetary science facilities and meteorite projects closer to home.

My official job title is research scientist. Research scientists make a living by developing ideas and serving as principal investigators on grants and contracts. Research scientists can work in universities, national labs or other institutes, like mine, which is a soft-money nonprofit company. I am a theorist/experimentalist, so I do scientific experiments and computer calculations, as well as manage project budgets and people. Right now, I am leading four grant projects and assisting on a fifth. Usually, I spend each day of the week on a different project or work on several projects per day.

My research specialties are in planetary science and astrophysics. A planetary scientist is someone who studies solar systems (either our own or others) and also anything found in a solar system, e.g., planets, moons, asteroids, meteorites, comets, dust. Planetary scientists are generally hybrid experts in astronomy, geology, chemistry, physics, and/or biology. Astrophysicists focus more on how physics is applied to astronomical objects like stars, galaxies, the interstellar medium, etc.

The first time I won a grant made me very happy. It's almost like winning an Academy Award because your peers vote on whether you win or lose (therefore, it is a major honor and acknowledgment that your work is important). Since science funding is limited, the odds are very small that you'll win, so it's also a relief to know that you'll be gainfully employed.

There wasn't one person who inspired me to become a scientist; I always knew that I was one, even before I knew the word for it. But I'd like to acknowledge the efforts of my parents in making sure that my dream of working in the space program became a reality.

My parents are not scientists or engineers, but they (and especially my mother) always took my desire to be a space scientist seriously and had good instincts that put me on the right path to becoming one (e.g., telling me very early on that I would need a Ph.D.; making sure that Santa brought me planetariums, microscopes, chemistry sets, geology books, and math toys every year; raising me to be tough and to not give up).

My grandfather, who was the vice-president of a rock quarry, provided early encouragement for my love of rocks and minerals.

My mother's cousin Nancy, who is a chemist and patent attorney, has provided great advice as a steady pen pal and supporter.

I am also inspired by my friends who ended up making their childhood dreams a reality and especially my friends and colleagues who work under extreme obstacles.

The basic career path for a scientist looks like this:

(You can exit this path at any one of the arrows; I went straight through with no breaks.)

PI stands for Principal Investigator; this title designates that you are able to support yourself (and others) financially to do science research. PI status is a championship title that you have to fight to hold every year (think of every grant win as an Olympic gold medal) and is essential for employment as a scientist no matter what company or country you will eventually work in.

Also, it's critical to build your entrepreneurial skills in tandem with your scientific knowledge, as well as becoming a world-renowned expert in at least one area (by publishing papers in professional journals, giving conference presentations and letting people know informally what you bring to the table).

The most successful scientists are originals (i.e., not clones of their advisers), who have diversified their knowledge base and who consistently deliver quality products on time -- those are the qualities I'd recommend striving for.

My current hobbies and interests include: designing and sewing my own clothing, dessert production/consumption, dreaming about hand-to-hand combat and someday owning a MP5 rifle, volunteering for early career and women in science initiatives, and reading comparative literature -- all of which are fairly delightful.

First, I would issue a caveat that advice is merely an opinion born of someone's own experiences and hopes or fears for you. Following someone's advice to the letter rather than following your own gut instinct is a bad idea, especially for someone considering a STEM (Science, Technology, Engineering, and Math) career, where self-reliance is important.

For students interested in STEM, first figure out exactly how interested you are in STEM: enough to go pro (i.e., pull long work hours or move wherever in the world there is a job)? If you enjoy the subject matter, but aren't sure you want that lifestyle, then check out different career options (e.g. at the American Astronomical Society Non-Academic Astronomers Network website).

If you don't mind the career demands of a straight research or teaching career, then I'd recommend excelling in science and math coursework, as well as taking electives in other areas that will help with writing and public speaking. STEM careers involve a lot of competition (individual and team), so sign up for as many tournaments as possible and challenge yourself academically to maintain your edge.

And because becoming a scientist is a lifelong marathon where it's possible to work into your 90s, be sure to take breaks for fun and exercise along the way.