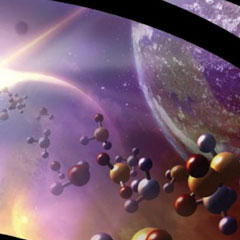 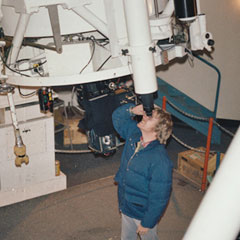 I grew up in San Marcos, Calif., which is about 40 miles north of San Diego. I currently live in Flagstaff, Ariz.

Being able to narrow down the depths and horizontal extent of such buried ice deposits which may serve as the water source for future human exploration of Mars is really thrilling!

When I was in the fifth grade my class took a field trip to the Palomar College Planetarium where we attended a planetarium show. During the course of the show the presenter announced that a new moon had just been discovered around Saturn. He went on to tell us that this was the first new moon to be discovered in the solar system in over 20 years.

I was amazed by this fact -- this was the first time that I realized that science was not just a bunch of stale old facts and figures from a textbook, but that science was in fact an active field where new discoveries were still being made by scientists.

Currently, my research (funded by NASA) focuses on utilizing spacecraft images of other planetary surfaces and what the impact craters we see throughout the solar system can tell us about the formation ages of surface features and the near-surface structure of these bodies (especially the presence/absence of buried water/ice reservoirs).

What is a professor?

I am currently a professor in the Department of Physics and Astronomy at Northern Arizona University. I also serve as associate department chair and director of the NAU/NASA Space Grant Program.

A professor teaches at the college/university level. Typically, you need a Ph.D. in your specialty in order to reach the rank of a professor, and particularly to work at the university level. How do you become a professor at the university level? You start out being hired as an assistant professor. In this role you must demonstrate your teaching and research abilities, as well as serve your institution and professional community. Assistant professors do not have job security (i.e., the institution can let an assistant professor go at any time). So, after six years of being an assistant professor you put together a packet describing everything you have done and accomplished in order to apply for promotion with tenure. (Tenure means you have job security -- the institution cannot remove you unless you do something really bad.) If you are approved, you become an associate professor. After another six years of demonstrating your teaching, research and service abilities, you can then apply for promotion to the top level of professorship, which is "full professor." As a full professor you are one of the senior members of your institution.

My favorite moments have to do with my research. I particularly enjoy it when I complete the data collection stage of a research project and then begin analyzing the data. Seeing the results of my efforts for the first time is always exciting! For example, much of my work looks for regional trends in the distribution of crater features indicating excavation into subsurface ice reservoirs. Being able to narrow down the depths and horizontal extent of such buried ice deposits which may serve as the water source for future human exploration of Mars is really thrilling!

Lots of people have inspired me over the years. Carl Sagan's books and his "Cosmos" TV program showed me that people can actually make a living doing what interested me.

On a personal level, my dad always strongly encouraged my interest in astronomy, as did my high school science teacher (Steve Drew), my community college astronomy instructor (Jim Pesavento), my Ph.D. advisor (Bob Strom), and many of my friends and colleagues.

I became interested in Mars due to the first spacecraft images of the planet sent back by the Mariner missions. I continue to be inspired by new results from the various spacecraft missions throughout our solar system.

Don't limit your classes to only what you are interested in -- take courses in other areas of science in order to broaden your knowledge base. Take advantage of any opportunities presented to you -- you never know how that bit of experience will help you in the future.

Do you want to teach at the university level? Universities are looking to hire people with prior teaching experience -- something beyond being a teaching assistant for labs in college. If you don't have that experience, check around at the local community colleges or other colleges/universities in your area and see if they have an opening for an adjunct instructor in science or math.

And learn how to "sell yourself." When you apply for any job you should succinctly highlight your accomplishments. However, be modest about them -- you don't want to come across as a braggart. ("Selling yourself" is especially important for women since we are often trained early on to play down our accomplishments.)

I love to hike and get out among the mountains and canyons of the Southwest. I also enjoy traveling to new locations and exploring their natural beauty and history. Reading is one way that I relax, as well as getting together and catching up with my friends.

Take all the math, science and computer courses that you can in school. However, you will also need to have very good reading, writing and speaking skills to succeed in science and engineering. Foreign language skills are also important since scientists travel a lot and collaborate with international colleagues.

The scientific fields are becoming very interdisciplinary, so don't just limit yourself to your major interest -- take other courses which will help you expand your knowledge base. Planetary science is particularly broad, requiring knowledge about surface geological processes, atmospheric dynamics, chemical reactions, various aspects of geophysics, and conditions conducive to biological activity.