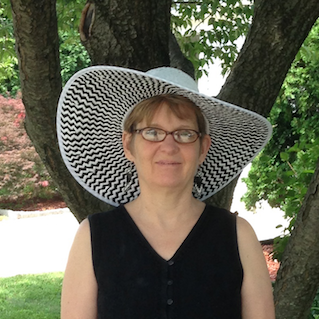 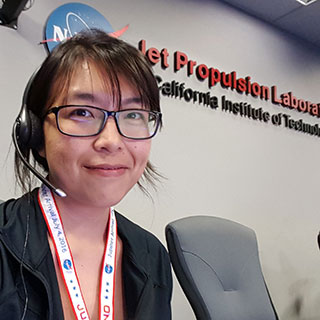 Nadine Barlow’s interest in space started with a fifth-grade field trip to a planetarium. She fell in love with planetary geology in college and went on to teach astronomy at colleges and universities in California, Texas, Florida, and Arizona. Nadine specialized in impact craters, particularly on Mars. She created the “Catalog of Large Martian Impact Craters” and wrote the book “Mars: An Introduction to its Interior, Surface and Atmosphere.” Asteroid 15466 Barlow was named in her honor by the International Astronomical Union.

Nadine died on August 17, 2020, of cancer. This tribute is based on past interviews and biographies.

When I was in the fifth grade my class took a field trip to the Palomar College Planetarium [in San Marcos, California] where we attended a planetarium show. During the show, the presenter announced that a new moon had just been discovered around Saturn. He went on to tell us that this was the first new moon to be discovered in our solar system in over 20 years.

I was amazed by this fact. This was the first time I realized that science was not just a bunch of stale old facts and figures from a textbook, but that science was in fact an active field where new discoveries were still being made by scientists. My dad gave me my first telescope a year later.

I also gained an appreciation for geology during our annual family vacations – when we would travel across the country by car and stop off at many of the national parks and monuments.

Take advantage of any opportunities presented to you – you never know how that bit of experience will help you in the future.

After I received my doctoral degree, I moved to Houston for a postdoctoral position at the Lunar and Planetary Institute, followed by a National Academy of Sciences National Research Council Assistantship at NASA Johnson Space Center. I also taught astronomy and planetary geology courses part-time at the University of Houston Clear Lake (UHCL). I realized that I enjoyed both teaching and research and decided to pursue an academic position at a university where I could combine the two pursuits. After my postdoctoral positions ended, I moved to Orlando, Florida, where I started the astronomy program at the University of Central Florida (UCF) and served as the first director of the UCF Robinson Observatory.

I spent more than 6 years in Orlando but grew homesick for the spectacular geology and dark night-time skies of the west. In 2002 I accepted an assistant professor position at Northern Arizona University (NAU), so my two cats and I packed up and moved to Flagstaff that August. I received tenure at NAU in 2006, and then in 2012 I was promoted to professor and became director of the NAU/NASA Space Grant Project, and an Associate Director of the Arizona Space Grant Consortium. I became Associate Chair of the NAU Department of Physics and Astronomy in Fall 2010.

My research, funded by NASA, focuses on utilizing spacecraft images of other planetary surfaces and what the impact craters we see throughout the solar system can tell us about the formation ages of surface features and the near-surface structure of these bodies – especially the presence or absence of buried water and ice reservoirs.

I have compiled the premier resource on information about Martian impact craters larger than 3 miles (5 kilometers) in diameter for the “Catalog of Large Martian Impact Craters.” I am a founding member and chair of the Planetary Crater Consortium, an international organization of scientists interested in impact craters throughout the solar system.

I received the NAU Research and Creative Activity Award for Most Effective Research Mentor in 2011 for my mentorship of students on research projects.

Don't limit your classes to only what you are interested in – take courses in other areas of science to broaden your knowledge base. Take advantage of any opportunities presented to you – you never know how that bit of experience will help you in the future.

Take all of the math, science, and computer courses that you can in school. You will also need to have very good reading, writing, and speaking skills to succeed in science and engineering. Foreign language skills are also important since scientists travel a lot and collaborate with international colleagues.

And learn how to "sell yourself." When you apply for any job you should succinctly highlight your accomplishments. Be modest about them -– you don't want to come across as a braggart. "Selling yourself" is especially important for women, since we are often trained early on to play down our accomplishments.

Lots of people have inspired me over the years. Carl Sagan's books and his "Cosmos" TV program showed me that people can actually make a living doing what interested me.

On a personal level, my dad always strongly encouraged my interest in astronomy, as did my high school science teacher (Steve Drew), my community college astronomy instructor (Jim Pesavento), my doctoral program advisor (Bob Strom), and many of my friends and colleagues.

My favorite moments have to do with my research. I particularly enjoy it when I complete the data collection stage of a research project, and then begin analyzing the data. Seeing the results of my efforts for the first time is always exciting! For example, much of my work looks for regional trends in the distribution of crater features indicating excavation into subsurface ice reservoirs. Being able to narrow down the depths and horizontal extent of such buried ice deposits – which may serve as the water source for future human exploration of Mars – is really thrilling!

I love to hike and get out among the mountains and canyons of the Southwest. Reading is one way that I relax, as well as getting together and catching up with my friends. I am grateful that I get the opportunity to travel all over the world for both business and pleasure – experiencing other cultures, learning the history of other places. Admiring nature’s beauty around the world makes me appreciate all that our home planet has to offer.