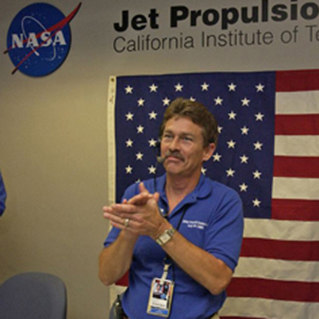 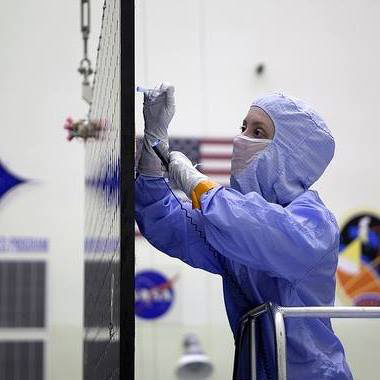 I grew up in Ashville, Ohio. I now live in Altadena, Calif.

I always wanted to be a scientist (although what kind of scientist varied during my childhood). First, I wanted to be a paleontologist and then when I was in sixth grade I read a book about a team of astronauts who explored the solar system and other stars -- the captain was a physicist. So not really knowing what physics was I decided that I would be one and explore the solar system some day.

I went to college at Ohio State where I majored in engineering physics. While in college, I realized that rather than doing research in physics, I was really more interested in using physics to study how planets work. I earned my Ph.D. at the University of Hawaii, doing ground-based astronomy of Mars. I was able to combine all of the engineering I had learned on the instrumentation side from college with the physics, science and with the creative process -- it was very, very hands-on.

My favorite moment was the landing of the Mars Exploration Rover Spirit on Mars. It was amazing to be able to see the instruments that you had worked on actually sending back science data from Mars.

My first post-doc opportunity was at the Jet Propulsion Laboratory (JPL), because at the time there was a mission called Mars Observer, and it had an instrument that was going to be an imaging spectrometer (from the visible range out to five microns). However, within a month or so after I got to JPL, the instrument was deselected from the mission. I pretty much totally switched fields at that time. I was able to finish my post-doc and I ended up being hired by JPL. There was a lot about JPL (being at the edge of the science and the engineering) that was a really good fit, and I felt I could make a contribution there.

My parents -- I know it sounds cliché, but I grew up in a small town without a lot of science opportunities in my community. My parents were both teachers and when they saw I was interested in science they took the time to find science oriented things for me to do outside of school -- even if they had to drive hours to get there and then wait all day for the activity to be over. They basically told me that if it was important to me, I could do it.

I study geologic processes on planets. I'm a co-investigator (Co-I) and investigation scientist for ChemCam on the Mars Science Laboratory (MSL). My job on the mission is to worry about how the engineering (stuff being built) and science (what we want to learn about Mars) fit together. Once the instrument I've worked on is at Mars, I get to help take data and then actually analyze the data and figure out what it all means.

I have a bunch of different skills that mesh together well for this job. Since I have a degree in engineering, I have the basic knowledge I need to understand how a rover works, and I know how to analyze and interpret the data. My career goal is to someday build my own instrument.

My favorite moment was the landing of the Mars Exploration Rover Spirit on Mars. It was amazing to be able to see the instruments that you had worked on actually sending back science data from Mars.

The key thing is, early in your career, you need to be useful. You need to be the good team player -- a contributor. Be helpful. This takes really simple things like saying, "Hey, there's this old data set that would be great in the proposal. I'm going to slog through and get the calibration and make some great figures" [as an example]. Or talking to people and saying: "Hey, what can I do?" So, find something that you can do to contribute, even if it's not really the most "sexy" thing out there. Be the team player. If someone asks you to do something -- go out and do it, and look for things to help to make things happen. Hard work is important.

My house is a few miles from the Angeles Crest National Forest, so I see coyotes around pretty regularly (also raccoons, possums and skunks). I try to go hiking in the neighborhood on a regular basis. However, I really like getting to the ocean where I boogie board (I learned in Hawaii). I wear a wet suit though, since the water in California is so cold.

This profile has been adapted from an original interview conducted by Susan Niebur for the Woman in Planetary Science website.