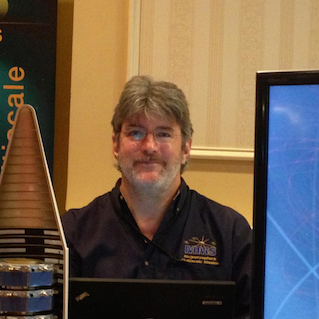 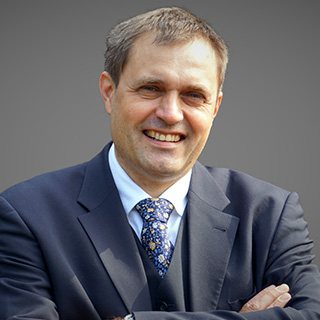 What first sparked your interest in space?

When Apollo 11 landed on the Moon and Neil Armstrong took his giant leap for mankind, it was early in the morning in the U.K. To this day, I clearly remember my mother coming into the bedroom and asking if anyone was awake and I spoke up. It was just after 3 a.m., July 21, 1969. The next thing I knew, I was bundled up on the living room sofa with my mother, watching this astonishing event unfold on our black and white TV.

I got interested in planetary science, volcanoes in particular, when I was in high school in England. Two events took place that had a great effect on me. At the time, I had no idea how these would shape my life and lead me to where I am today. The first thing that fired my imagination regarding planetary science was in 1979, when the NASA Voyager spacecraft discovered active volcanoes on Io, one of the moons of Jupiter. I knew about Io, I'd seen it through my telescope, but the fact that it had active, erupting volcanoes was wonderful to me—the conventional wisdom of the time said all of these outer solar system moons were inert, dead ice balls.

The second interesting event was the following year, when Mount St. Helens erupted—and showed how even the mainland United States was vulnerable to volcanic eruptions. My love of astronomy has stayed with me all my life, and kept me focused on my studies through high school. I worked hard as an undergraduate, and focused more on geology, which was new to me, but which I found fascinating. My final year project examined volcanoes on Earth and Mars. I moved on to a Ph.D. at Lancaster University in the United Kingdom, where I studied volcanoes on Io and how they might erupt. I was lucky to be mentored by Professors Lionel Wilson and Harry Pinkerton. Lionel, especially was (and still is) at the forefront of mathematical volcanology, uncovering the secrets of volcanic eruptions through an understanding of the underlying physics. I finally ended up at the Jet Propulsion Laboratory (JPL) in 1994 as a post-doctoral associate, studying Io's volcanoes, and then I was on the Galileo science team. I'm still at it, studying the extraordinary volcanoes on Io and also those on Earth. I now consider myself to be an Io expert—I have even written the definitive book on Io's volcanoes.

The first thing that fired my imagination regarding planetary science was in 1979, when the NASA Voyager spacecraft discovered active volcanoes on Io.

What is a volcanologist?

I study volcanoes—how they erupt, and why—and what they tell us about the interior not only of the Earth, but other planets and satellites across the solar system. Volcanoes have had a tremendous effect on the evolution of all the solid planets and many of the moons in the solar system. Volcanoes are windows into the interior of a planet—we see what the interior is made of because volcanoes erupt this stuff onto the surface where spacecraft can see it. Studying them here on Earth helps us understand how they work out there.

What was it like the first time you witnessed a volcano erupt?

The first volcano I saw actually in eruption was Kilauea volcano, Hawai’i. I was with my Ph.D. advisor (Prof. Lionel Wilson) and he hired a light plane for an overflight of the volcano. This was in 1988. When the pilot found out we were volcanologists he gave us a grand tour, standing the plane almost on its wingtip as we circled low over the Kupaianaha lava lake. The lake was very active, and it was a spectacular sight. I was well and truly hooked.

Do you have a favorite volcano?

On Earth, it's probably a toss-up between Erebus in Antarctica and Erta’Ale in Ethiopia. Both volcanoes have an active lava lake at their summits. The Erta’Ale lava lake in particular is likely a great analogue for some volcanic features on Io. It is also a perfectly mesmerizing sight, as the lava roils away under a thin crust, and occasionally lava fountains form, which are quite a sight (especially at night). I have a fond memory of sitting on the edge of the crater late one evening, watching the lake perform and just enjoying the spectacle.

What have been some favorite moments in your career so far?

In 2009 I traveled to the hottest place on Earth, the Afar region of Ethiopia. In August the temperature was over 122 degrees Fahrenheit (50 degrees Celsius). And in the Afar is the volcano Erta'Ale. This volcano has a very rare volcanic feature, an active lava lake, which in 2009 was about 55 m in diameter. This is a churning, spitting, cauldron of molten rock. I was amazed to hear the whooshing as the lava lake churned away, to smell and taste the acrid gases escaping from the lava, and to feel the blast of heat from the molten rock. I was there filming a sequence about Io for a television series called "Wonders of the Solar System," created by the British Broadcasting Corporation (BBC), and it was an amazing experience standing above this extraordinary lava lake discussing volcanoes on Io. The lava lake somehow reminded me of a tiger: beautiful to look at, a creature of immense power that was barely restrained, but if you got too close or were unlucky—well, it could take your arm off.

A few years ago I went to Antarctica to another lava lake at the summit of Mount Erebus, the world's most southerly erupting volcano. There the temperature was typically -58 degrees Fahrenheit (-50 degrees Celsius). So my job has taken me to the absolute extreme places on Earth, as well as to Io (via spacecraft, at least!)

How do you overcome challenges?

Never, never, never surrender to circumstance. You come up with a Plan B, and if that doesn’t work, then a Plan C. Exhaust the alphabet, if necessary.

A foundation in physics and mathematics is a great help. From an early age I was interested in astronomy. The process never ends—I'm still learning. Simply put, a lot of my job concerns heat. I think about how heat is lost from an object to its surroundings, and how heat loss affects the body losing heat. The object in question could be a planet, or a moon, or an individual lava flow or lake. A lot of the job is identifying the processes taking place and using physics to understand them under conditions on different planets. To do my job you really need a Ph.D. It is a lot of work, but it is immensely rewarding.

It sounds trite, but my work is really fun. I enjoy it so much that it is difficult to separate it from out of work activities as I am constantly thinking about what to do next with volcanoes. My very understanding wife cuts me a lot of slack! But I read voraciously—military history, thrillers, mysteries, science fiction and books on the history of science. I adore movies, and think that "The Big Bang Theory" is not only the funniest thing on TV but reminds me of some of the people I work with—really.

What are some of your favorite science fiction books and authors?

I read science fiction voraciously. Growing up I read a lot of Arthur C. Clarke and Isaac Asimov. One of my favorite Clark novels is “The Fountains of Paradise”, and I love his many short stories. Try the collection published in “Tales from the White Hart”. Asimov came up with “I, Robot” and others, terrific stories exploring the morality and ethics of early A.I. Another favourite: Robert Heinlein’s “The Moon is a Harsh Mistress”. In recent years I have hugely enjoyed the work of David Brin, Kim Stanley Robinson (his trilogy of martian novels “Red Mars”, “Green Mars” and “Blue Mars” is just fascinating; and “2312”; and “Aurora”) and the novels of Neal Stephenson – including “Seveneves,” which has the most gripping opening line of any novel I have ever read.

We are living in a new golden age of planetary exploration—there are spacecraft exploring the solar system from one end to the other, and now JPL is engaged in planning the next big mission to the Jupiter system. It won't arrive for many years, and a lot of scientists and engineers will be needed—to work on communications, propulsion, instrument design, project management, spacecraft design, scientists to establish the science goals of the mission, the observations that need to be made to meet those goals, the instruments needed to make the observations, and finally to analyze the data collected. So to get to JPL, work hard in school. Find a subject that you enjoy and stick with it. When you hit a rough patch (yes, I certainly hit a few), remember how much you love this subject and use that to regain your footing. I have always had a great deal of self-motivation, and that was a great help. Once you set your mind to do something, keep at it to achieve your goals. Be disciplined in your approach to work. Don't accept compromises regarding the quality of your work. Strive to be the best in your chosen field.