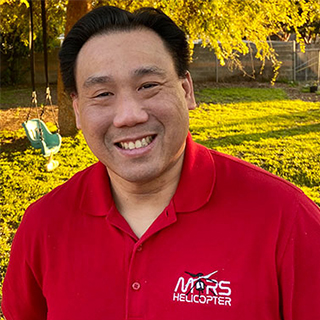 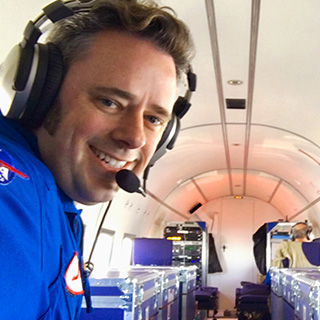 I was raised in Jericho, New York, on Long Island, in the eastern suburbs of New York City. This explains why I'm a devout New York Mets fan and why I call a 25 cent coin a "quawta."

The Moon landings had a huge influence on me, of course. As a kid, I was glued to the television set for every launch, landing, and splashdown of the Apollo astronauts. Also, my dad would take the family on visits to the Hayden Planetarium in New York City. It was a magical place. Especially spectacular were the landscape paintings lit with black light and the gigantic ceiling orrery. With this inspiration, I would hang my own homemade models of the planets from my bedroom ceiling. The moons were made of crumpled masking tape on top of toothpicks, which were stuck into the sides of styrofoam ball planets.

In the spring of 1970, when I was 5 years old, my whole family drove down to Virginia to see a solar eclipse – without me. They left me with my grandparents! So I showed them by becoming the astronomer in the family. My dad ultimately made it up to me by sending me to the 1991 solar eclipse in Hawaii. It was mesmerizing and spectacular to see the Sun suddenly replaced by a hole in the sky.

When I was in college at Cornell University, I knew that I wanted to do something related to astronomy. But it was only once I was in school for a couple of years that I realized there was a research field known as planetary geology, which combines planetary science with geology. I learned about it because Carl Sagan was teaching a graduate seminar on “Ices and Oceans in the Outer Solar System” and, fortunately, he allowed me to sit in on this class. Around the same time, I took a course taught by Professor Joe Veverka, which culminated in a final paper on [Jupiter's moon] Ganymede's grooved terrain. This paper was largely based on the work of Veverka's graduated Ph.D. student, Steve Squyres – who of course went on to lead the Mars Exploration Rover missions.

For graduate school, I went to Arizona State University to work with Professor Ron Greeley, who was a member of the Galileo imaging team. My thesis work there was on the origin of ridges and grooves on icy satellites, focusing on the geology of the Uranian satellite Miranda.

The completion of my graduate work was fortunately timed, as planning for the Galileo spacecraft's upcoming satellite encounters was just beginning. I worked with Greeley on the initial plans for Galileo's imaging of [Jupiter's moon] Europa. I then moved on to Brown University as a post-doctoral researcher working with Professor Jim Head, also a Galileo imaging team member. At Brown, I helped plan all of the imaging observations for the Ganymede encounters by Galileo from G1 (in 1996) through G29 (in 2000), and several of the intervening Europa encounters.

"The most exciting moments are the 'aha moments' when a scientific problem that you've been wrestling with suddenly falls into place."

I went on to become a faculty member at the University of Colorado in Boulder, where my research concentrated on icy satellite geology, especially Europa. There I taught classes and mentored students and learned so much. Teaching was fun and inspirational, but it took an incredible amount of effort, while also balancing research and service responsibilities. During my time both at Brown and in Colorado, I served on several JPL-facilitated study teams to help define and refine the science for a future Europa mission.

In 2006, I was invited to join JPL to help move along the plan for a Europa mission. But giving up a life in academia was no small decision, so I promised myself that I'd devote three years at JPL to trying to get the Europa mission going. If unsuccessful, I'd go back to academia. I continued to serve as the scientific lead for Europa mission studies, and I worked as the lead editor for a compilation book on Europa science. Along the way, I had the great honor and challenge to serve as project scientist for Cassini's first extended mission at Saturn.

Nine years after joining JPL, NASA finally gave the go-ahead to the Europa multiple-flyby mission concept, which would become the Europa Clipper. Based on my science, study team, and project experience, JPL recommended me to NASA as the project scientist for the Europa Clipper mission.

Carl Sagan was a key scientific influence. I first knew of Sagan through his coverage of the Viking landings on Mars, his appearances on "The Johnny Carson Show," and later through his outstanding books and the television series "Cosmos." I considered Cornell University as a possible college to attend because Sagan was a professor there. And then, because he was teaching a course in planetary geology at Cornell, I learned that there was such a field. I audited two of his classes and later worked on an independent research project under the tutelage of his post-doctoral researcher Reid Thompson, ultimately presenting the results to an enthusiastic Sagan. I wouldn't be doing what I am today without Carl's influence, guidance and encouragement. I was so glad to learn that he had the chance to see and be intrigued by some of the early Galileo Europa images before he passed away.

What is a project scientist, and what part(s) of the project are you working on?

Based on my Cassini experience, I commonly explain the role of the project scientist as that of a "science diplomat." The project scientist unites the diverse members of the science team toward a unified goal, moderates interactions between science team members and the JPL media office, interfaces with NASA Headquarters and the science community as a whole, and serves as the translator between the science and engineering teams to mutually communicate their needs. Each of these efforts can be challenging, frustrating and/or rewarding, sometimes all in the same day. One thing's for sure: It's never boring!

The most exciting moments in science are the "aha! moments," when a scientific problem that you've been wrestling with suddenly falls into place and begins to make sense. These "aha moments" come from a mix of hard work, intuition, experience, and perseverance. I’ve been fortunate to have had several such moments in my career, especially when talking through a problem with a colleague. I find that addressing a problem together, with different perspectives and backgrounds, can provide those key insights that any individual scientist might not have discovered alone.

On the mission front, it was incredible to gather with members of the mission's engineering team to watch NASA's web broadcast of the announcement of the Europa Clipper instrument selection. Our instruments and their principal investigators are top-notch, and watching their announcement after so many years of hard work was rewarding and quite moving.

Follow your heart and your dreams. I can't tell you how many times I was warned of how few jobs there are in planetary science, how difficult it can be to get one, and how difficult it is to get a flagship mission approved by NASA and Congress. Such advice can discourage those who are not fully dedicated, but those who persevere have a chance to attain one of those few jobs or help to push forward a mission. If you are dedicated to your path and good at what you do, opportunities will emerge.

What do you do for fun outside of work?

I dabble in a few different fun activities. One is contra dancing, which is related to square dancing, and similarly is conducted by a caller who instructs the dancing couples. Unlike in square dancing, contra dancers are positioned in long lines. You dance with your partner and the neighboring couple, and then proceed with your partner to the next couple, dancing with most people in the room by the end of the night. Contra dancing has evolved from English country dancing into a fast-paced group dance that resembles a living Escher drawing. My wife and I have also tried West Coast Swing dancing, which is a lot of fun but quite difficult to get right.

Now and then I get a chance to paint (oils and acrylics) or play guitar (I'm a folkie at heart), although work keeps me from doing this as much as I'd like. Occasionally, I bike or play tennis. I live in Venice Beach and enjoy walking or biking along the boardwalk and beach there, especially to see the California Sun plummet into the Pacific. Also, watching our three wonderful and amusing cats keeps me entertained at just about any time.

This Voyager 2 image of Miranda is one of my very favorites. Miranda turned out to be so unexpected and bizarre, and I spent much of my Ph.D. trying to decode the handful of Miranda images that exist. This particular image is scientifically rich and beautiful, representing the incredible feat of seeing a small, distant, dark world at the edge of our solar system. It's at the same time inspirational science and beautiful artwork.

NASA's mission to Jupiter's icy moon Europa will see whether it could harbor conditions for life.