Earth's Moon is the only place beyond Earth where humans have set foot.

The brightest and largest object in our night sky, the Moon makes Earth a more livable planet by moderating our home planet's wobble on its axis, leading to a relatively stable climate. It also causes tides, creating a rhythm that has guided humans for thousands of years. The Moon was likely formed after a Mars-sized body collided with Earth.

Earth's Moon is the fifth largest of the 200+ moons orbiting planets in our solar system.

NASA currently has three robotic spacecraft exploring the Moon – Lunar Reconnaissance Orbiter and the twin ARTEMIS spacecraft (not to be confused with NASA's new Artemis program to send astronauts back to the Moon).

10 Need-to-Know Facts About the Moon
1

If you set a single green pea next to a U.S. nickel, you'd have a pretty good idea of the size of the Moon compared to Earth.

The Earth and Moon are tidally locked. Their rotations are so in sync we only see one side of the Moon. Humans didn't see the lunar far side until a Soviet spacecraft flew past in 1959.

Can Stand on It

The Moon has a solid, rocky surface cratered and pitted from impacts by asteroids, meteorites, and comets.

The Moon has a very thin and tenuous atmosphere called an exosphere. It is not breathable.

The Moon has no moons.

The Moon has no rings.

More than 105 robotic spacecraft have been launched to explore the Moon. It is the only celestial body beyond Earth – so far – visited by human beings.

The Moon's weak atmosphere and its lack of liquid water cannot support life as we know it.

Apollo astronauts brought back a total of 842 pounds (382 kilograms) of lunar rocks and soil to Earth. We are still studying them.

The Moon was the first place beyond Earth humans tried to reach as the Space Age began in the late 1950s. More than 100 robotic explorers from more than half a dozen nations have since sent spacecraft to the Moon. Nine crewed missions have flown to the Moon and back.

The former Soviet Union logged the first successes with its Luna program, starting with Luna 1 in 1959. NASA followed with a series of robotic Ranger and Surveyor spacecraft that performed increasingly complex tasks that made it possible for the first human beings to walk on the Moon in 1969.

Twenty-four humans have traveled from the Earth to the Moon. Twelve walked on its surface. The last human visited the lunar surface in 1972.

The program takes its name from the twin sister of Apollo and the goddess of the Moon in Greek mythology. Artemis 1, formerly Exploration Mission-1, is the first in a series of increasingly complex missions that will enable human exploration of the Moon and Mars.

FAQ: What is a Lunar Eclipse?

FAQ: What is a Lunar Eclipse?

During a lunar eclipse, Earth comes between the Sun and the Moon, blocking the sunlight from falling on the Moon. There are two kinds of lunar eclipses:

During some stages of a lunar eclipse, the Moon can appear reddish. This is because the only remaining sunlight reaching the Moon at that point is from around the edges of the Earth, as seen from the Moon's surface. From there, an observer during an eclipse would see all Earth's sunrises and sunsets at once.

All About Lunar Eclipses ›

Our lunar neighbor has inspired stories since the first humans looked up at the sky and saw its gray, cratered surface. Some observers saw among the craters the shape of a person's face, so stories refer to a mysterious "man in the Moon." Hungrier observers compared the craters to cheese and dreamed of an entire sphere made of delicious dairy products.

The Moon made its film debut in a 1902 black and white silent French film called "Le Voyage Dans la Lune" ("A Trip to the Moon"). And a year before astronauts walked on the Moon, "2001: A Space Odyssey" (1968) told the story of astronauts on an outpost on the Moon. Decades later, it is still widely regarded as one of the best science fiction movies ever made.

American astronauts have planted six American flags on the Moon. But that doesn't mean the United States has claimed it; in fact, an international law written in 1967 prevents any single nation from owning planets, stars, or any other natural objects in space. 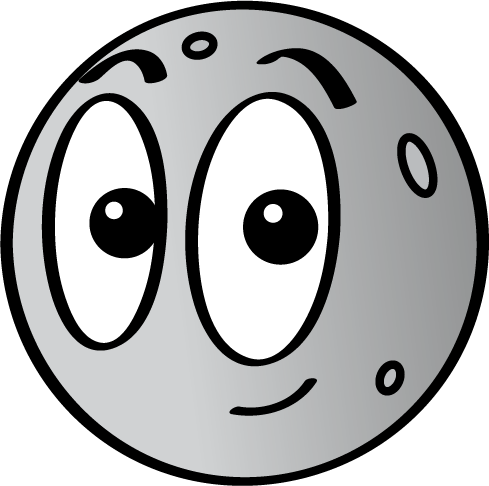 Most of the planets in our solar system – and some asteroids – have moons. Earth has one moon. We call it "the Moon" because for a long time it was the only one we knew about. Many languages have beautiful names for our Moon. It is "Luna" in Italian, Latin, and Spanish, "Lune" in French, "Mond" in German, and "Selene" in Greek.

Our Moon is like a desert with plains, mountains, and valleys. It also has many craters, holes created when space rocks hit the surface at a high speed. There is no air to breathe on the Moon.

The Moon travels around the Earth in an oval-shaped orbit. Scientists think the Moon was formed long, long ago when Earth crashed into a Mars-sized object.

We always see the same side of the Moon from Earth. You have to go into space to see the other side.

NASA's Eyes on the Earth Puts the World at Your Fingertips
The next full Moon is the Beaver Moon, and there will be a near-total lunar eclipse.

NASA Outlines Challenges, Progress for Artemis Moon Missions
Earth’s atmosphere reacted in surprising ways to the lowering of emissions during the pandemic.

Emission Reductions From Pandemic Had Unexpected Effects on Atmosphere
NASA has selected a new Earth science mission that will study the behavior of tropical storms and thunderstorms.

NASA Selects New Mission to Study Storms, Impacts on Climate Models
A team of shoebox-sized rover scouts was recently put to the test at a NASA Glenn Research Center lab.

Small But Mighty NASA Weather Instruments Prepare for Launch
This page showcases our resources for those interested in learning more about ocean worlds.

Ocean Worlds Resources
A study shows how the chemicals in an exoplanet’s atmosphere can reveal whether the temperature on its surface is too hot for liquid water.

How to Find Hidden Oceans on Distant Worlds? Use Chemistry
The 2021 Antarctic ozone hole reached its maximum area on Oct. 7 and ranks 13th-largest since 1979, according to NASA and NOAA scientists.

2021 Antarctic Ozone Hole 13th-Largest, Will Persist into November
NASA is looking into whether mixed reality technology could help with repairs and upgrades on the Cold Atom Lab aboard the space station.

Upgrading the Space Station's Cold Atom Lab With Mixed Reality
A vivid aurora is seen over Earth from the International Space Station.

Behold an Aurora Over the Southern Skies
JPL's lucky peanuts are an unofficial tradition at big mission events.

NASA Leadership Visits JPL, Discusses Climate Change and Mars
The next full Moon is the Hunter's Moon, the Travel Moon, and the Lucy Moon.

Full Moon Guide: October - November 2021
Satellites are producing a deluge of data, so engineers and scientists are setting up systems in the cloud to manage it.

NASA Turns to the Cloud for Help With Next-Generation Earth Missions
As the ice-and-snow rubble known as mélange melts in Antarctica’s ice shelves, rifts can grow and icebergs break off even in the brutal cold of winter.

CuPID CubeSat Will Get New Perspective on Sun-Earth Boundary