OSIRIS-REx is on its way back to Earth to deliver samples it collected from asteroid Bennu in 2020. The samples will arrive on Earth in 2023. An extended mission will take the spacecraft into orbit around near-Earth asteroid Apophis in 2029.

“OSIRIS-REx’s many accomplishments demonstrated the daring and innovative way in which exploration unfolds in real-time,” said Thomas Zurbuchen, associate administrator for science at NASA Headquarters. “We have a primordial piece of our solar system headed back to Earth where many generations of researchers can unlock its secrets.”

Sep 24, 2023: Sample capsule expected to be delivered to Earth

OSIRIS-REx is the third major planetary science mission for NASA’s New Frontiers Program (after New Horizons launched in 2006 and Juno launched in 2011).

OSIRIS-REx is an acronym for "Origins, Spectral Interpretation, Resource Identification, Security-Regolith Explorer." The goal of the mission is to collect a sample weighing at least 2.1 ounces (59.5 grams) from near-Earth asteroid 101955 Bennu (formerly known as 1999 RQ36) and then bring the sample to Earth.

The mission, developed by scientists at the University of Arizona, will give us more information about how the early solar system formed and about how life began. It will also help us better understand asteroids that could impact Earth in the future.

About 55 minutes after launch on Sept. 8, 2016, from Cape Canaveral, Florida, and after a boost by the Centaur upper stage, OSIRIS-REx separated from its Atlas V rocket and deployed its solar arrays.

On Dec. 28, 2016, the spacecraft conducted its first deep-space maneuver (DSM-1), firing the main engine to position it properly for an Earth gravity-assist encounter in late 2017.

A second firing, the first to use the spacecraft’s attitude control system (ACS) thrusters, on Aug. 25, 2017, further sharpened its trajectory by changing the velocity by about 19 inches (47.9 centimeters) per second.

About a month later, on Sept. 22, 2017, OSIRIS-REx, passed Earth at a range of about 10,710 miles (17,237 kilometers) as part of a gravity-assist maneuver that tilted its orbit to match that of Bennu. During the encounter, the spacecraft took several high-resolution pictures of both Earth and the Moon.

The spacecraft got its first glimpse of Bennu in August 2018, sending back a grainy image taken at a distance of about 1.4 million miles (2.3 million kilometers). In early November 2018, OSIRIS-REx sent back detailed images showing the asteroid’s shape and some surface features.

After arriving at Bennu on Dec. 3, 2018, OSIRIS-REx mapped the asteroid in detail while the mission team searched for a safe sample collection site. One of the biggest challenges was that Bennu has an extremely rocky surface with hazardous boulders.

After a year, the mission team selected a sample site called “Nightingale” located in a northern crater 460 feet (140 meters) wide. The crater is thought to be relatively young, and the regolith, or rocks and dust, is freshly exposed. This means the site would likely allow for a pristine sample of the asteroid, giving the team insight into Bennu’s history.

On Oct. 20, 2020, OSIRIS-REx unfurled its robotic arm and, in a first for NASA, briefly touched down on asteroid Bennu to collect dust and pebbles from its surface in a maneuver known as “Touch-And-Go” or TAG.

Two days later, the mission team received images that confirmed the spacecraft had collected more than enough material to meet one of its main mission requirements – acquiring at least 2 ounces (60 grams) of Bennu’s surface material. On Oct. 28, 2020, the mission team sent commands to the spacecraft, instructing it to close the Sample Return Capsule – marking the end of one of the most challenging phases of the mission.

On April 7, 2021, OSIRIS-REx completed its last flyover of Bennu and started slowly drifting away from the asteroid. During the flyby, OSIRIS-REx imaged Bennu for 5.9 hours, covering more than a full rotation of the asteroid. It flew within 2.1 miles (3.5 kilometers) of Bennu's surface – the closest since the TAG sample collection event.

Images taken during the flyover revealed the aftermath of its historic encounter with the asteroid.

On May 10 at 4:23 p.m. EDT, the spacecraft fired its main engines at full throttle for seven minutes – its most significant maneuver since it arrived at Bennu in 2018. This burn thrust the spacecraft away from the asteroid at 600 miles per hour (nearly 1,000 kilometers per hour), setting it on a 2.5-year cruise toward Earth.

After orbiting the Sun twice, OSIRIS-REx is due to reach Earth on Sept. 24, 2023. Upon return, the capsule containing pieces of Bennu will separate from the rest of the spacecraft and enter Earth’s atmosphere. The capsule will parachute to the Utah Test and Training Range in Utah's West Desert, where scientists will be waiting to retrieve it.

After releasing the sample capsule, the main OSIRIS-REx spacecraft will have completed its primary mission. The mission was officially extended in April 2022.

With a new name to reflect the extended mission’s new goals, OSIRIS-APEX (OSIRIS-APophis EXplorer) will explore Apophis, an asteroid roughly 1,200 feet (roughly 370 meters) in diameter that will come within 20,000 miles (32,000 kilometers) of Earth in 2029. OSIRIS-APEX will enter orbit around Apophis soon after the asteroid’s Earth flyby, providing an unprecedented close-up look at this S-type asteroid. It plans to study changes in the asteroid caused by its close flyby of Earth and use the spacecraft’s gas thrusters to attempt to dislodge and study the dust and small rocks on and below Apophis’ surface. 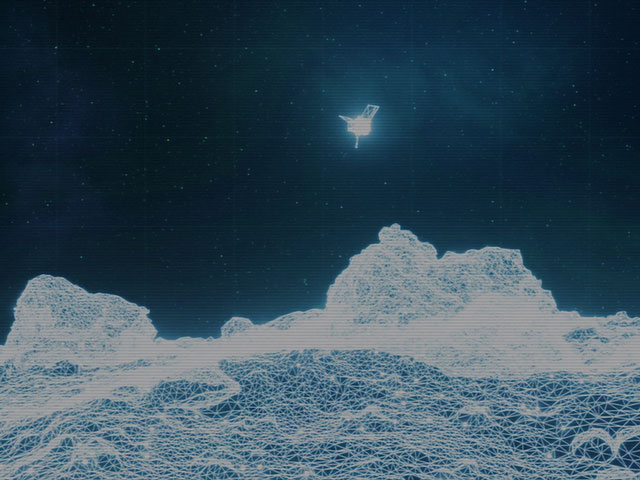 This resource package showcases our resources for those interested in learning more about OSIRIS-REx. It includes activities that can be done at home as well as videos, animations, stories, and articles.

more resources ›
The next full Moon will be on Sunday, Feb. 5, 2023. The Moon will appear full from early Saturday morning through early Tuesday morning.

The Next Full Moon is the Wolf or Ice Moon
NASA approves development of NEO Surveyor for a launch no later than June 2028.

NEO Surveyor Successfully Passes Key Milestone
The next full Moon will be Tuesday morning, November 8, 2022 at 6:02 AM EST.

The Next Full Moon is the Beaver, Frost, Frosty, or Snow Moon
NASA announced Friday the agency decided its Psyche mission will go forward, targeting a launch period opening on Oct. 10, 2023.

Psyche Launch Set for October 2023
This page showcases our resources for those interested in learning more about OSIRIS-REx.

OSIRIS-REx Resources
This page showcases our resources for those interested in learning more about the Lucy Mission.

Inspiration Links the Beatles, a Fossil and a NASA Mission
Scientists have pieced together the story of how dwarf planet Haumea became one of the most unusual objects in the solar system.

1st NASA Asteroid Sample Return Mission on Track for Fall '23 Delivery
Here’s a quick run through some of the more intriguing impacts across our solar system.

Explore the Solar System With NASA's New-and-Improved 3D ‘Eyes'
On March 27, 2022, Lucy’s science team discovered that the smallest of the mission’s Trojan asteroid targets, Polymele, has a satellite of its own.

Some Asteroids ‘Aged Early' by Sun, NASA Finds
The path through the solar system is a rocky road. Asteroids, comets, Kuiper Belt Objects—all kinds of small bodies of rock, metal and ice are in constant motion as they orbit the Sun. But what’s the difference between them? Why do these miniature worlds fascinate space explorers so much?

NASA's Lucy Mission Observes a Lunar Eclipse
NASA has extended the planetary science missions of eight of its spacecraft due to their scientific productivity and potential to deepen our knowledge.

Exploration Extended for 8 Planetary Science Missions
Psyche was tested to ensure it can operate in the extreme conditions it will face on its trip to a metal-rich asteroid.

Shake and Bake: NASA's Psyche Is Tested in Spacelike Conditions
A new study finds the speed of sound is slower on Mars and that, mostly, a deep silence prevails.

Solar System and Beyond Poster Set